Police Forces Swell in Ottawa as Prelude to Clampdown 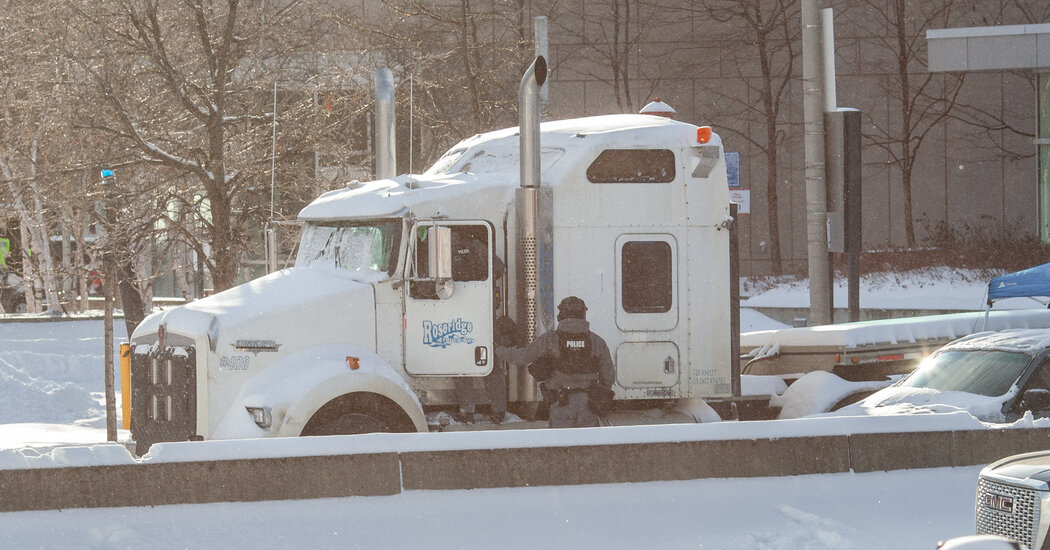 Twenty-two days after a trucker convoy rumbled into the nation’s capital to protest pandemic restrictions, the police moved in to clamp down on protesters in downtown Ottawa Friday morning, hoping to end weeks of gridlock that have roiled the city, infuriated local residents and shaken the country.

After a night of unusually heavy snowfall, during which police made several arrests, at least 100 police had assembled in the city center Friday morning, and police were seen arresting three protesters. Among those arrested on Thursday night was Tamara Lich, a leading activist, fund-raiser and singer who in the past has advocated the secession of Canada’s western provinces. She has become one of the main voices of the protest movement.

The police mobilization comes after mounting criticism that law enforcement has moved too slowly to end the protests, permitting protesters to taunt local residents for wearing masks, honk their horns in quiet residential neighborhoods and undermine local businesses.

About two dozen police vehicles, including an armored one, were at the ready, along with vans for transporting those detained, and a convoy of tow-trucks, escorted by police. Two motor coaches full of police officers were idling on a street in the city center. The buzzing of a police drone could be heard overhead.

On Thursday, police created a perimeter with about 100 checkpoints in Ottawa’s downtown core, to keep anyone but residents from entering, and declared the downtown a secure zone closed to outsiders.

Among the protesters there was a mood of quiet defiance. As of 9 a.m., the truck convoys had not yet started their daily honking. There was a sense of anticipation across the trucker encampment as reports trickled in from their organizers via a shared text message chain that police cruisers were seen massing in numbers outside of the demonstration.

The logjam in the nation’s capital, the weekslong blockade of an Ontario bridge that is vital to automakers’ supply chains, and the media projection of all that onto the global stage have given the protests an outsized megaphone and impact.

As the police move to clamp down on the protests, the so-called “Freedom Convoy” will likely live on long after the last trucks depart — if only as a vivid template of how civil disobedience can be effective, in particular in a liberal democracy where the threshold for law enforcement intervening to stop demonstrations can be high.

Much like Occupy Wall Street in 2011, the Canada convoys show that what seem like fringe political movements can gather force at a time of anxiety — and when the world’s cameras are pointed at them. Back then, the driving force was anger over endemic social inequality. These days it is a lethal global pandemic.

Dagny Pawlak, a spokeswoman for the protest, called Ms. Lich’s arrest “absolutely baseless and a disgrace to any liberal democracy, although not a surprise.”

Ms. Lich, of Medicine Hat, Alberta, has emerged as the public face and the most visible leader of the trucker convoy against pandemic restrictions. She was previously a senior member of a splinter party that advocated for Canada’s Western provinces to separate from Canada.

Throughout the protests, Ms. Lich has been adept at deploying social media — and her Twitter feed — to amplify the protesters’ grievances. Shortly before her arrest, she told a local reporter her message to the demonstrators was to “hold the line.”

Steve Bell, interim chief of the Ottawa Police Service, said Thursday afternoon that the police were committed to ending the “unlawful occupation.”

In a sign of intensifying frustration over the protests, on Thursday the scope of a class-action lawsuit against the protesters was expanded to include more workers and businesses whose livelihoods have been upended by the protests. In total, the lawsuit is seeking about 306 million Canadian dollars in compensation for lost income.

The protests began weeks ago with a loosely organized group of truckers objecting to a requirement that they be vaccinated if they cross the U.S.-Canada border. With organizing help from right-wing activists, the protests expanded into a broader movement opposed to an array of pandemic measures and to Prime Minister Justin Trudeau generally.

Mr. Trudeau took the rare step this week of declaring a national public order emergency — the first such declaration in half a century — to end the protests. The move extended more robust policing measures across the country, and took aim at both protesters’ fund-raising, which has been deemed a criminal activity, and the demonstrators’ personal and business bank accounts. 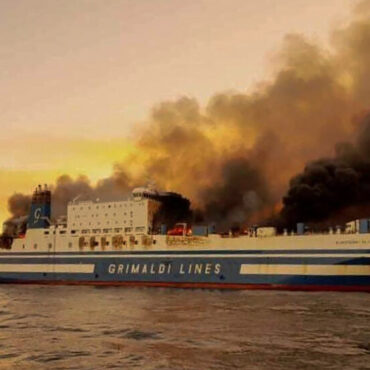 ATHENS — Hundreds of people were rescued on Friday from a burning ferry near the Greek island of Corfu, according to a Greek Coast Guard spokesman, who said two passengers remained trapped in the ship’s garage and 11 more were missing.The fire broke out early Friday morning on the deck of the ship, the Euroferry Olympia, which was bound for the Italian port of Brindisi, the Coast Guard said.Four Coast […]