Nearly two dozen people have been arrested after police swooped on a rave taking place on the picturesque South Downs in breach of lockdown restrictions.

More than 1,000 people are thought to have flocked to the event, part of which is ongoing, police said.

Pictures and video on social media appeared to show crowds dancing in a field in front of speakers pumping out music earlier on Sunday.

Organisers of the apparent rave, which drew a significant crowd from outside the area, could face £10,000 fines.

At least 23 people have been arrested on suspicion of offences including drink and drug-driving, possession of drugs and theft, and have been taken into custody, the force said.

Various roads were shut as police dealt with the incident, and cars are being stopped by officers as they leave the area to check that drivers are in a fit state to drive.

Under coronavirus rules, gatherings must not exceed 30 people unless they are covered by a legal exemption.

Organisers of illegal gatherings of more than 50 people outdoors can face fines of up to £10,000.

Chief Superintendent Nick May said: “Our priority is ensuring the safety of the community and everyone in the vicinity.

“We have a significant number of officers at the scene working to bring the event to a safe and timely conclusion.

“This is an ongoing matter and we thank the public for their patience and co-operation at this time.”

Drone footage from the scene showed large numbers of vehicles lined up along country roads in the area.

A Sussex Police spokesperson added on Sunday afternoon: “Emergency services have also been met with hostility at the site, with one police officer being assaulted.

“A second officer has also been injured in a collision with a vehicle being driven by someone leaving the event.

“The driver has been arrested on suspicion of driving while unfit through drink/drugs.”

A significant number of people at the rave are thought to have travelled from outside Sussex and officers are trying to identify the organisers.

“There continues to be disruption on the road network in the area owing to a large number of badly parked vehicles, and people are still urged to avoid the area if possible”, the spokesperson added. 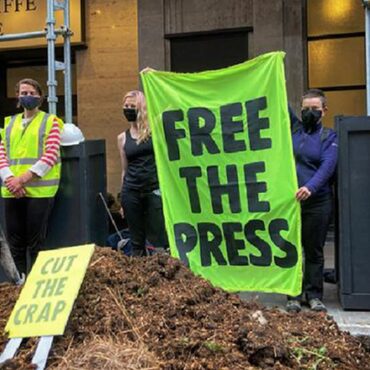 Protest outside a newspaper offices

Six arrested after Extinction Rebellion dumps manure outside newspaper offices Six people have been arrested after an Extinction Rebellion “free the press” protest in central London saw manure dumped outside the offices of the Daily Mail newspaper. The Metropolitan Police said a group of protesters emptied manure from a truck outside a property in Young Street, Kensington, at around 6.40am on Sunday. The force said the group “climbed scaffolding on […]