Although Mary Berridge’s son displayed signs of autism from birth — including motor skill and speech delays, difficulty with change and sensory sensitivity — it took over seven years for him to be formally diagnosed.

Having sought multiple professional opinions over the years, the North Carolina-based photographer believes that an oversimplified view of this varied and complex disorder was to blame.

“In retrospect, he was a textbook case,” she said in a phone interview. “But he didn’t check every box.”

Her son Graham, now aged 18, was eventually identified as having Asperger’s syndrome, one of a range of conditions on the autism spectrum. Berridge believes that his misdiagnosis was symptomatic of the effects of wider, pervasive stereotypes — and of our difficulties speaking openly and honestly about the disorder.

“There’s so much fear around autism that people don’t want to bring it up,” she said. “They don’t want to suggest it unless they think it’s 100 percent true. They’re like, ‘Oh your kid’s just quirky’ … but I think that’s unfortunate, because the earlier you find out the better.”

Hoping to challenge misconceptions among the neurotypical, Berridge spent more than five years capturing photographs of young people with the condition. The resulting book, “Visible Spectrum: Portraits from the World of Autism,” is filled with moments of warmth, depicting her subjects as unique individuals with diverse experiences and rich relationships.

Some of the images center on specific interests and talents. Young subject Rico, who began horseback riding as a form of therapy, is pictured alongside a horse; recent graduate Remington — who Berridge describes in her book as as “a passionate musician who says that autism has augmented his ‘ability to be creative and stay focused'” — is pictured with his eyes closed as he strums an electric guitar.

But the photographer is also keenly aware of stereotyping autistic people as having obsessive interests or being “geniuses.” (“Most autistic people are not geniuses,” she writes, “but each looks at the world in a unique way, often refreshing in its originality, lack of pretense and reordering of priorities.”) As such, many of her images depict everyday scenes: playing outdoors, relaxing at home or embracing family members.

“There are a lot of stereotypes — and there might be some truth to some of them,” the photographer said. “Autistic people do spend a lot of time in their heads… But they can also be very social. And they like having friends, and most of them like interacting with other people.

Mia, a young autistic person whose picture appears on the cover of Berridge’s book. “She’s very smart, has an awesome memory and loves technology, science and golf,” her mom writes. Credit: Mary Berridge

This duality is one of many explored in the book, which includes several photos of her own son. In one image, Graham sits on a bench at the Louvre in Paris; it is unclear whether he is intensely focused on an artwork or gazing at something else altogether. (Berridge confirmed it was the latter: “He was actually looking up at the skylight.”) Another, taken in 2015, shows him seemingly lost in thought during a play fight with his cousin.

“It is amazing to me that Graham looks so disconnected and pensive in the middle of some very tumultuous wrestling,” Berridge wrote in an essay, titled “Wrong Planet,” that serves as her book’s introduction. “It was fleeting … (and) he says he was likely contemplating his next move.”

Beyond the usual difficulties of photographing kids, working with autistic subjects presented some unique challenges, Berridge said. As such, she gave them little direction and chose settings they were most comfortable in — often outdoor ones, as she only shoots with natural light.

“Their anxiety level can run much higher than most people’s,” she explained. “With me, a stranger, coming and taking pictures, I just wanted it to be as comfortable as possible for them — so they could be themselves.”

Her memories of the project are filled with endearing moments of candor, her young subjects sometimes displaying what she called a “disarming” directness. One girl, when asked what she thought of her portrait, simply replied: “It’s boring.” (The photo in question made Berridge’s final selection, nonetheless.)

The photographer writes that the autistic community hopes society can evolve “from ‘autism awareness’ to ‘autism awareness, acceptance and empowerment.'” And in addition to images, her book also features written contributions from subjects and their families.

One of the most moving among them is a letter that one of Berridge’s subjects, Will, wrote to his family and friends after graduating from college. “This has been a very long and, at times, extremely difficult ride,” he wrote. “I’d be remiss to not acknowledge that battling through years of autism and me just being me was not easy for anybody who knew me, most especially my mother.”

Many of Berridge’s photos were taken in nature, like this image of her subject Joshua climbing a tree. Credit: Mary Berridge

Indeed, Berridge reserves praise for parents who, like her, have immersed themselves in what she calls “the world of autism” to better understand their children’s’ unique perspectives.

“I would say one of the most meaningful things, to me, was how the parents dealt with having a child with a disability, especially the ones where the disability was really serious,” she said. “It was really amazing to see them change their whole way of looking at the world and what they used to think of as priorities.

“Autistic people have a lot to offer,” she concluded. “And it would be a benefit to all of us if we understood them more and let them be themselves — if we accepted and respected them and their autistic personhood, so that they don’t have to feel like they have to pretend not to be autistic.”

“Visible Spectrum: Portraits from the World of Autism,” published by Kehrer Verlag, is available now. A US edition will be available on May 10, 2022. 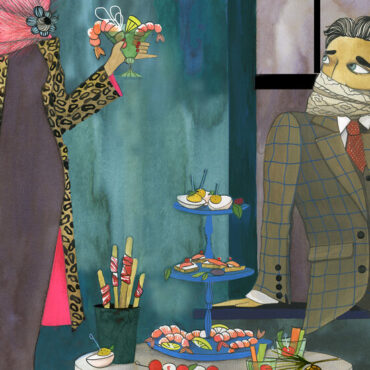 Thinking of hosting a holiday party? Here are a few tips.

If the 2020 holiday season was the year to cancel everything, 2021 is about figuring out how to get our groove back. Weddings and bar mitzvahs have been back on for months, and families are gathering to celebrate the holidays with grandparents, aunts and uncles. But the smaller social events with friends — the friendsgivings, cocktail parties and New Year’s Eve bashes — have been slower out of the gate, […]