Putin says Russia will decide on Monday whether to recognize breakaway regions. 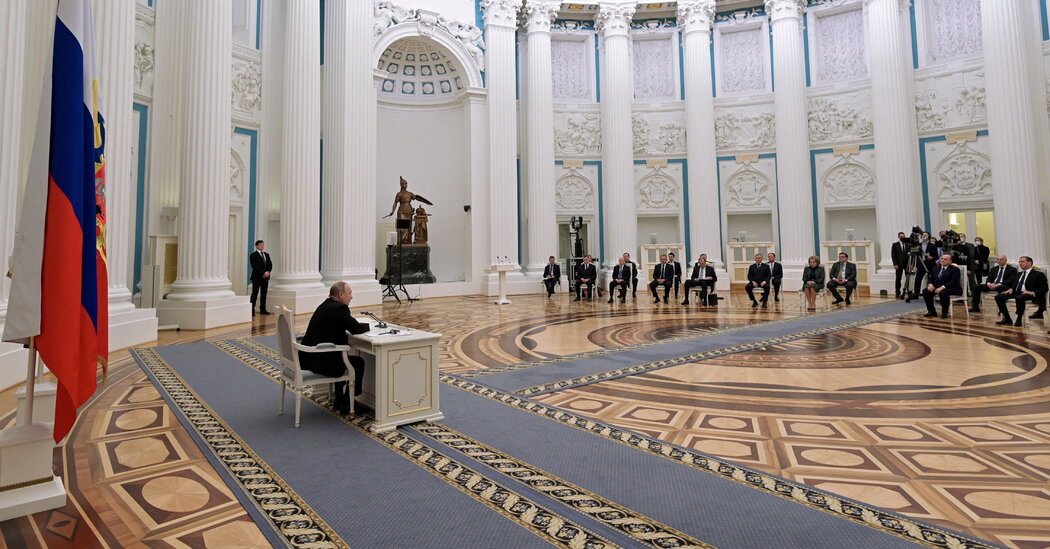 MOSCOW — President Vladimir V. Putin kept an anxious world guessing about whether he plans to invade Ukraine, announcing on Monday that he would decide by the end of the day whether to recognize the independence of two breakaway regions of Ukraine.

With Russian state media issuing an ominous drumbeat of unsubstantiated reports about aggression by Ukraine — which U.S. officials have warned Moscow would use as a pretext for a military intervention — Mr. Putin used a televised meeting of his Security Council to declare that a peace agreement for the Russia-backed separatist territories was in effect dead.

His subordinates, all of whom favored recognition, used the meeting to blame the United States for the escalation in tensions. Still, Russia’s foreign minister said he was willing to meet his American counterpart for talks this week in Geneva.

America’s goal in its foreign policy, including in Ukraine, is “the collapse of the Russian Federation,” Nikolai Patrushev, the secretary of Mr. Putin’s Security Council said. “The people of Ukraine are against this,” Mr. Patrushev said of the country’s pro-Western path. “They’re being scared, they’re being forced to take this path.”

The United States and its allies have worried that if Moscow recognizes the two enclaves, in the region known as the Donbas, it could open the door for Russia to move more forces into Ukraine. U.S. officials estimate that Russia has amassed 190,000 troops in and around Ukraine, including in the Donbas, where a long-running trench war between Ukrainian forces and the Russia-backed rebels has reignited in recent days.

Underscoring the possibility that he might recognize the so-called Donetsk People’s Republic and Luhansk People’s Republic as independent states, Mr. Putin chided his foreign intelligence chief, Sergei Naryshkin when he appeared to be equivocating on the issue, prompting Mr. Naryshkin to stutter and then say he was in favor of annexing the territories.

Edging toward the twilight of his political career, Mr. Putin, 69, is determined to burnish his legacy and to correct what he has long viewed as one of the greatest catastrophes of the 20th century: the disintegration of the former Soviet Union. Asserting Moscow’s power over Ukraine, a country of 44 million people that was previously part of the bloc and shares a 1,200-mile border with Russia, is part of his aim of restoring what he views as Russia’s rightful place among the world’s great powers, the United States and China.

By signaling that he might recognize the two breakaway regions, Mr. Putin continued to build pressure on Russia’s smaller neighbor. His efforts were helped on Monday when Belarus suggested that Russian forces deployed there for military exercises might remain indefinitely.

The announcement that he was open to consider discussing a possible recognition of the two areas came after the United States said such a move would be a violation of a peace settlement with the self-declared territories.

Mr. Putin, speaking at the beginning of a meeting of his Security Council, said it was “clear to all that this range of measures is not going to be implemented in any way,” he said, referring to the peace settlement, known as the Minsk agreements. But he said Russia had been trying “to resolve all the complexities.”

Mr. Putin said the Security Council would also consider further steps related to his demands for “security guarantees” from the United States and its allies, such as a rollback of the NATO presence in Eastern Europe and a legally binding pledge barring Ukraine from ever joining the alliance.

The United States has described Russia’s main demands as nonstarters, but expressed a willingness to discuss other security issues, such as missile placements.

Russia has sought to portray itself as a protector of ethnic Russians living in both the separatist territories, but the United States and its allies have accused Moscow of searching for a pretext for a possible invasion of Ukraine. 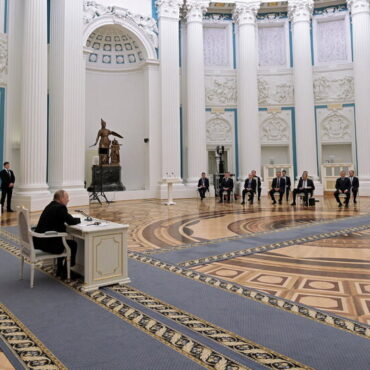 By Reuters •February 21, 2022President Vladimir V. Putin said he would consider appeals by the leaders of two separatist areas of eastern Ukraine to be recognized as independent states. The U.S. has said such a move could lead to a Russian troop deployment in the disputed regions.Original story from https://www.nytimes.com