The number of police officers and staff facing disciplinary action over allegations they abused their position for sexual purposes has “risen sharply” over the last three years, according to a watchdog.

The Independent Office for Police Conduct (IOPC) issued a warning that such individuals have “no place in policing and will be found out”, as it revealed the figures.

Last year there were 70 IOPC probes of police officers and staff over allegations of abuse of position for a sexual purpose (APSP), as opposed to 10 in 2016.

Between April 2018 and March 2021, 66 faced misconduct proceedings after being investigated.

Some 42 of these were in the last year alone and misconduct was proven in 63 of the cases.

Of the 52 who faced gross misconduct proceedings – for the most severe allegations – 73% (38) are no longer serving and were barred from working in policing again. Most of these (29) were sacked and the remaining nine would have been if they had not resigned already.

In that time, seven police officers or staff were also prosecuted for criminal offences, leading to six convictions of which three resulted in an immediate custodial sentence, the IOPC said.

The watchdog put the rise in disciplinary action down to an increased effort to sanction on those responsible as heightened awareness of the problem led to more cases being reported. It was also suggested the rise may signal some “pent-up demand” as it takes time for cases to work through the system.

The data does not provide a complete picture of all action being taken as forces can also carry out their own investigations.

IOPC deputy director general Claire Bassett said the numbers showed there would be “consequences” for this behaviour.

Speaking to the PA news agency, she said: “What these numbers tell us is that this is a very serious form of corruption, but also those police officers that do this will get caught and will suffer significant sanction for that if they do.

“Those that do indulge in this are highly likely to lose their jobs and they may well face criminal sanctions and custodial sentences as a result.

“It’s really important that there is a culture in policing that has a zero tolerance of any form of behaviour that is insulting, is sexist, is homophobic, there is just no place for that in modern policing.

Describing the behaviour as an “appalling abuse of the public’s trust” which has a “devastating impact” on the often vulnerable people involved, she said: “Recent events we have seen, including the horrific actions of Wayne Couzens, remind us that policing must act to root out this kind of behaviour once and for all.

“The police are there to help them, not exploit them.”

While this is not a “new problem” and there is is a “clear desire right across policing to tackle this”, she said there is still “a lot to do” as she urged police forces to be as open and transparent as possible, adding: “It’s really important that the public see these officers being held to account.”

Changes made in 2017 after the body’s predecessor – the Independent Police Complaints Commission – found some forces were not treating APSP cases as a form of corruption, led to a “significant and sustained rise in the number of referrals and independent investigations”, the IOPC said.

Now, APSP is the “single largest form of police corruption” the IOPC deals with, accounting for around a quarter of all corruption referrals last year, and almost 60% of such investigations.

In many cases, the actions may appear “harmless at first”, like sending messages from a personal phone or putting kisses at the end of a text message, but this could be the “start of a pattern of escalating behaviour”, Ms Bassett said.

She added: “Each case threatens to undermine the trust the vast majority of officers work extremely hard to build. It is in everyone’s interest to root out those who abuse their position, and it is vital that anyone who experiences or witnesses this kind of unacceptable behaviour feels empowered to speak up.” 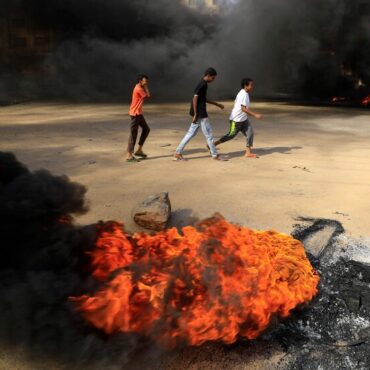 By Christina Kelso, Lucas Lilieholm and Chevaz Clarke-Williams •October 25, 2021Sudanese soldiers fired on pro-democracy protesters who flooded the streets of the capital Khartoum after the nation’s top military commander dissolved the government and declared a state of emergency.Original story from https://www.nytimes.com