Russia Advances on Three Cities in Face of Fierce Resistance 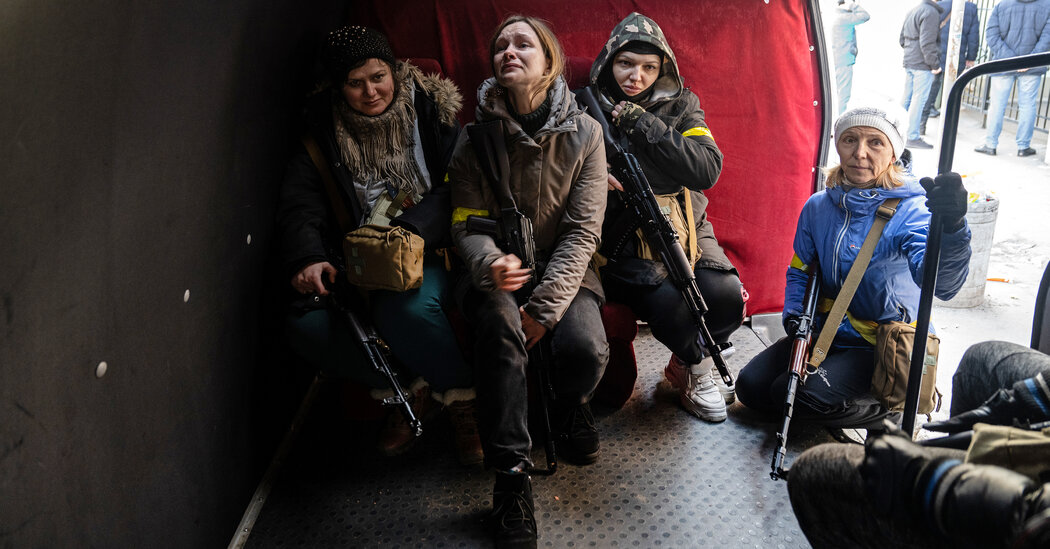 KYIV, Ukraine — The Ukrainian military, outmanned and outgunned, waged ferocious, close-range battles on Saturday to maintain control of the capital, Kyiv, and other cities around the country as intense street fighting broke out on the third day of the Russian invasion.

A day after Ukrainian soldiers sought to forestall an attack on the capital by blowing up a bridge and setting up armed checkpoints, bursts of gunfire and explosions could be heard across Kyiv, including in its heart, Maidan square, where Ukrainian protests led to the toppling of a pro-Moscow government in 2014.

Ukraine’s president, Volodymyr Zelensky, said in a video on Saturday that the military, aided by civilians armed with rifles and firebombs, had “withstood and successfully repelled enemy attacks” throughout the country.

“The fighting continues in many cities and districts of our state, but we know what we are protecting — the country, the land, the future of our children,” he said. “Kyiv and key cities around the capital are controlled by our army. The occupiers wanted to block the center of our state and put their puppets here, as in Donetsk. We broke their plan.”

As both sides tried to shape perceptions of how the fighting was going, the Kremlin said on Saturday afternoon that the Russian assault on Kyiv had continued “in accordance with the plan of operation,” according to a spokesman, Dmitri S. Peskov.

Mr. Peskov said that the campaign had been paused to allow the Ukrainian government to consider peace negotiations, but New York Times reporters in Kyiv heard sustained shelling throughout Friday night, and on Saturday morning, a civilian apartment block on the southwestern edge of Kyiv was hit by a missile, injuring at least six people, according to Ukraine’s emergency services.

A majority of the more than 150,000 Russian forces that had massed on the Ukrainian border were now fighting in the country, but they were “increasingly frustrated by their lack of momentum” as they faced stiff Ukrainian resistance, especially in the country’s north, a senior Pentagon official said on Saturday.

Despite their combat power, Russian troops did not control any cities, although they were closing in on Kyiv and other major urban centers, the official said. Nor did Russian warplanes fully control the skies over Ukraine, as Ukrainian fighter jets and air defenses continued to engage Russian forces.

The Russian attack from the air, land and sea is fast-moving and extremely fluid, however, and despite the Ukrainian resistance, particularly around Kyiv and Kharkiv, most Western analysts expect the Ukrainian military to succumb to the larger and more technologically advanced Russian military in the coming days.

The Pentagon’s assessment was echoed by the British Ministry of Defense, which said the speed of the Russian advance had “temporarily slowed likely as a result of acute logistical difficulties and strong Ukrainian resistance.” It said that the overnight clashes in Kyiv probably involved “limited numbers of pre-positioned Russian sabotage groups” and that Russia’s ultimate aim was to capture the capital.

The fighting came as tens of thousands of refugees continued to flee the country and the United States and its European allies scrambled to fortify Ukraine’s forces by sending missiles, medical equipment and helmets.

Kyiv’s mayor, Vitali Klitschko, declared a curfew starting at 5 p.m. Saturday until 8 a.m. Monday, and warned that any civilians on the street during that period “will be considered members of the enemy’s sabotage and reconnaissance groups.”

The overnight fighting in Kyiv scattered glass shards, bits of metal and shell casings across hundreds of yards of pavement, near a trail of bloody footprints. At the site of a predawn fight with Russian vehicles and possibly infantry, which had been waged along a central thoroughfare, Victory Prospect, Ukrainian soldiers were digging trenches on Saturday.

Mr. Klitschko said that service had been suspended on the subway system, where the stations will serve as round-the-clock shelters. In Kyiv and across Ukraine, people huddled in bomb shelters, lined up at bank machines and stocked up on essentials amid the wail of air raid sirens.

In the port city of Odessa, on the Black Sea, a missile hit a Japanese cargo ship called the Namura Queen late Friday, injuring a crew member and damaging the vessel, the ship’s owner said. The shipping company, Nissen Kaiun, said the vessel had docked in Odessa to load grain and would now head to Turkey.

The package will include “further lethal defensive assistance to help Ukraine address the armored, airborne and other threats it is now facing,” Mr. Blinken said in a statement.

The Netherlands said that it would provide 200 Stinger air defense systems. Greece said it would provide thousands of protective medical masks, gloves and suits, as well as defibrillators and portable breathing machines.

There was also growing support to ban Russia from SWIFT, the international banking system that connects more than 11,000 financial institutions around the world. The request by Ukraine has been backed by Lithuania, Estonia, Latvia, Britain, France, Hungary and Italy.

But efforts to engage Russia and Ukraine in negotiations showed no tangible signs of progress, despite continued overtures by several nations.

Turkey was pursuing a cease-fire as soon as possible to prevent further loss of life and damage to Ukraine, President Recep Tayyip Erdogan of Turkey told Mr. Zelensky in a phone call on Saturday, according to Mr. Erdogan’s office.

Escalating the conflict was of no benefit to anyone, Mr. Cavusoglu said, repeating his country’s readiness to host negotiations.

The Biden administration said on Friday that Russia was never serious about finding a diplomatic solution to the crisis, and that weeks of back-and-forth between Washington and Moscow amounted to a sham as the Kremlin prepared for war.

“Moscow engaged in the pretense of diplomacy,” the State Department spokesman, Ned Price, said at a news conference. “It now appears quite clear that Russia was not, and has not been, interested in genuine diplomacy.”

The fighting has created a growing humanitarian crisis, with at least 100,000 Ukrainians entering Poland since Thursday, the Polish government said, and thousands more crossing into Romania and Moldova to escape the forces ripping apart their country.

Ukrainian women and children poured into eastern Poland on Friday, with mothers carrying babies and leading children by the hand across a border crossing at Korczowa, where they were welcomed by Polish volunteers offering food and diapers.

Natalia Khukar, 32, who arrived with her two sons, Maxim, 8, and Oleh, 5, cursed President Vladimir V. Putin of Russia as she waited by the roadside for a relative to collect the family.

“I have no words to describe what Putin is doing,” she said, tears welling in her eyes. “A normal person would never do what Putin has done. He must have gone mad.”

Prime Minister Nicolae Ciuca of Romania said that at least 19,000 people from Ukraine had entered his country since the fighting began. About 11,000 have remained in Romania and 40 have applied for asylum, he said.

Mr. Ciuca visited one busy border crossing, Siret, on Friday evening as well as a nearby stadium that could serve as a temporary refugee camp as the number of people arriving grows.

“I would not have expected to experience such situations again,” Mr. Ciuca, a retired general, said in a statement. He denounced the suffering of “people who are plagued by the horrors of a war.”

While thousands have fled the country, others with little or no military training have taken up arms distributed by the Ukrainian government in a frantic bid to bolster the military.

Arsan, 35, the owner of a coffee shop in Lviv, Ukraine, was one such volunteer.

Only three days ago, he was going to the gym and getting ready for work when his wife told him the country was at war. On Saturday morning, he was learning to make Molotov cocktails and to spot fluorescent missile targets on buildings placed there by the Russians, and joining a brigade of citizens getting ready to fight.

“We can learn to shoot because we don’t know how this situation will develop,” he said.

Asked whether the military could hold off the Russian attack on Kyiv, Arsan said that every night was terrible but that he believed they would prevail.

“The Ukrainian army is doing a great job,” he said. “They are super people.”

In Russia, where street protests have been met with force and arrests by the police, Moscow escalated its crackdown on free speech.

The Kremlin’s communications regulator slowed down access to Facebook and warned 10 Russian independent news outlets that their websites could be blocked. Their offense: publishing articles “in which the operation that is being carried out is called an attack, an invasion or a declaration of war.” 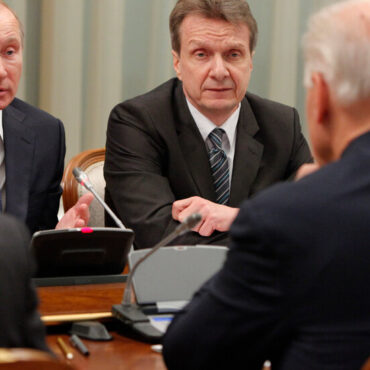 Biden and Putin, Children of the Cold War, Face Off Over Ukraine

WASHINGTON — As President Biden tells the story, he was blunt with Vladimir V. Putin during a meeting in Moscow more than a decade ago. “I’m looking into your eyes, and I don’t think you have a soul,” Mr. Biden recalled telling the K.G.B. veteran. Mr. Putin smiled. “We understand one another,” he said.Now, as the United States seeks to rally the world to counter Russia’s invasion of Ukraine, Mr. […]