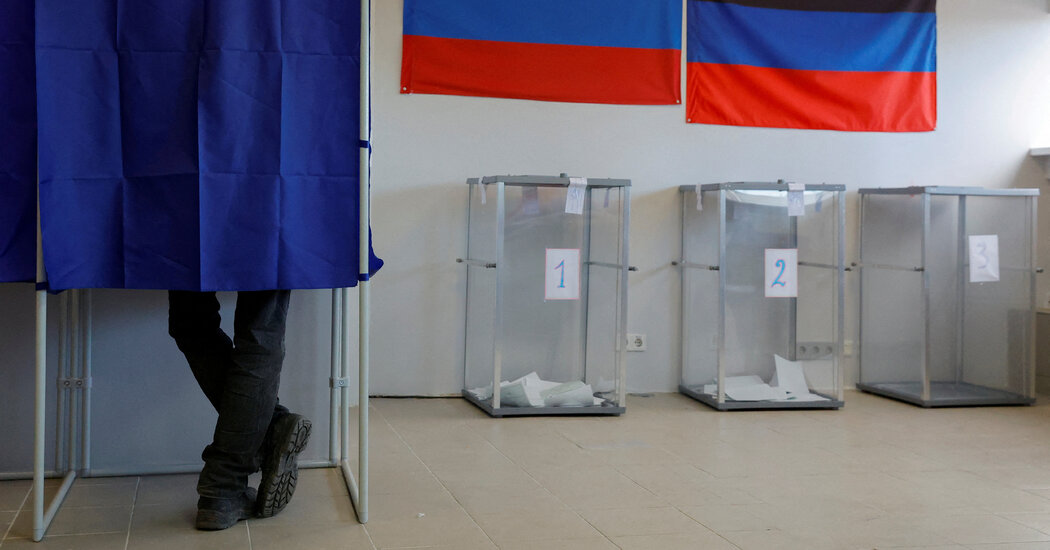 KYIV, Ukraine — In the occupied city of Kherson, some Ukrainian men believe that if they break their own arms, maybe the Russians will not force them into military service. Others are hiding in basements. Some are trying to run even though they are forbidden to leave the city, residents said, and virtually everyone is afraid.

“People are panicking,” said Katerina, 30. “First they were searching our houses, and now the Russians will conscript our men to their army. This is all unlawful but very real for us.”

As the Kremlin’s conscription drive faced protests across Russia for a fifth day, new signs of resistance, and fear, emerged on Sunday in the territories it occupies in Ukraine as well.

The drive to compel Ukrainians to battle other Ukrainians is part of a broader, if risky, effort by Moscow to mobilize hundreds of thousands of new fighters as its forces suffer huge casualties and struggle to hold off Ukrainian advances in the east and south.

It comes at the same time as a Russian-orchestrated vote that is setting the stage for the Kremlin to cleave Ukraine through an annexation that has been broadly condemned around the world.

The result of the pseudoreferendum underway is expected to be announced on Tuesday. The anticipated outcome: that a majority of people in four Ukrainian regions — Donetsk, Luhansk, Kherson and Zaporizka — “voted” to secede from Ukraine and join Russia. President Vladimir V. Putin of Russia is then widely expected to declare in coming days those areas belong to Russia and therefore protected by the might of its full arsenal, including the world’s largest stockpile of nuclear weapons.

At the same time, Russian military officials continued to cast a dragnet across the vast expanse of their own nation, which stretches halfway around the Northern Hemisphere, for hundreds of thousands of men to conscript into the military, many likely to soon be dispatched to Ukraine.

Despite draconian laws against dissent and the arrest of thousands of Russians protesting the “partial mobilization” in recent days, scattered demonstrations continued on Sunday, with reports of widespread unrest in Dagestan, a republic in the Caucasus region of southern Russia. The police fired into the air to clear one demonstration, according to videos circulating on social media, and Russian social media channels reported that some villages were refusing to comply with mobilization orders.

Amid rumors that Mr. Putin may close the nation’s borders completely, an exodus from the country continued, with a line of 2,500 cars reported at the Russia-Georgia border on Sunday, according to the Federal Customs Service.

The State of the War

Mr. Putin had resisted ordering a mobilization for months, but his decision underscored the Kremlin’s struggles on the battlefield, where more than 80,000 Russian soldiers have been killed or injured in just over seven months, American officials estimate. It was the largest escalation of the war since Moscow began its full-scale invasion in February, and it underlined Mr. Putin’s commitment to a prolonged struggle to bend Ukraine to his will.

In an address on Sunday, President Volodymyr Zelensky of Ukraine urged Russians to avoid mobilization by any means, including by surrendering themselves to Ukrainian captivity.

“We see that people, in particular, in Dagestan, began to fight for their lives,” he said. “We see that they are beginning to understand that this is a question of their lives. Why should their husbands, brothers, sons die in this war? In a war that one man wants.”

The brutality of the Russian campaign in Ukraine has been demonstrated by the mass graves found in Izium, the torture chambers used in Kupiansk and the trail of death left behind by Russian soldiers in Bucha. Rights groups, United Nations investigators, international journalists and Western officials have all documented the path of destruction that Russian occupation forces have left in their wake.

But the latest effort to dragoon unwilling Ukrainian men to fight and kill other Ukrainians added a new element of terror to an already harsh existence under Russian rule in occupied Ukraine.

While the Kremlin spent eight years stoking separatist sentiment in the parts of eastern Ukraine controlled by Russia since 2014, the brutality of the invasion has almost certainly dampened it even there, and a conscription drive could weaken it further.

In the two southern regions partly under the control of Russian forces, Kherson and Zaporizka, all men ages 18 to 35 have been forbidden to leave, and many have been ordered to report for military duty, according to witnesses and Ukrainian officials.

“Many people are calling us and asking whether we could help them to evacuate,” Halyna Odnorih, a coordinator in the city of Zaporizhzhia for people who have escaped occupied regions, said in an interview on Sunday. “But unfortunately we can’t.”

Ivan Fedorov, the exiled mayor of the occupied city of Melitopol, said on Sunday that men could no longer travel out of Zaporizhzhia, and he urged people seeking to avoid Russian conscription “to leave for Crimea, then for the European Union or Georgia and then return to Ukraine.”

“Because everyone will certainly be taken away from the street and get mobilized,” he said.

In eastern Ukraine, the situation is more complicated since Russia has occupied parts of Luhansk and Donetsk since 2014 and the ranks of Kremlin-backed rebels there have for years been filled out with Moscow sympathizers. Still, Russia’s proxy leaders there have had to forcibly conscript soldiers as casualties have risen.

Russia is also stepping up conscription efforts in Crimea, the southern peninsula that it illegally annexed from Ukraine in 2014, according to rights groups, Crimean officials and witnesses.

Those groups say the Russian military has been disproportionately conscripting Crimean Tatars, an ethnic minority group that has faced persecution by Russian officials “with the apparent goal of completely silencing dissent on the peninsula,” according to a 2017 Human Rights Watch report.

Alim Aliev, a founder of the rights organization Crimea SOS, said that 80 percent of summons to the Russian Army in Crimea had been issued to Crimean Tatars.

Tamila Tasheva, the presidential representative of Ukraine in Crimea, said on Sunday that local military authorities had issued 1,500 draft notices to the Crimean Tatars through visits to the people’s houses and work places, including markets.

She said that while the “partial mobilization” announced by the Kremlin was said to affect only those with previous military service, the local Russian authorities did not even bother with the pretense of asking those being conscripted from the Tatar community if they had ever been in the military.

Mykhailo Podolyak, a senior adviser to Mr. Zelensky, called the conscription campaign in Crimea “a real ethnic genocide and an enormous tragedy for the entire nation.”

“Forcing citizens to a war in the occupied regions is nothing more than Moscow’s attempt to cleanse the territory of a disloyal population,” he said on Sunday.

Ukrainian officials said that the Russian effort to conscript Ukrainians was further evidence that the Kremlin’s ultimate aim was the same one Mr. Zelensky had warned when the war started.

“Russia wants to turn Ukraine into silent slaves,” he said in April during an address to the United Nations Security Council.

As Moscow moves ahead with its plan to annex parts of Ukraine, Kyiv has called for another urgent meeting of the Security Council this week.

The recruitment of unwilling soldiers carries obvious risks for Russia. Military analysts have said that conscripts from Luhansk and Donetsk were part of the forces whose stunning collapse in the northeastern Kharkiv region this month allowed for Ukraine’s most successful offensive operation of the war.

The Ukrainian intelligence service said last week that Ukrainian recruits sent by Russia to fight in Kherson have “refused to take part in combat missions.” Citing intercepted communications and interviews with relatives, the agency said that Russian commanders had threatened to send conscripts “to the front line without weapons if they refuse to follow orders.”

Protests swell in IranIran’s largest antigovernment protests since 2009 gathered strength on Saturday, spreading to as many as 80 cities.Protesters have reportedly taken the small, mostly Kurdish city of Oshnavieh. Many fear a crackdown: “We are expecting blood to be spilled,” said an Iranian Kurd based in Germany who edits a news site. “It’s an extremely tense situation.”In response, the authorities have escalated their crackdown, including opening fire on crowds. […]