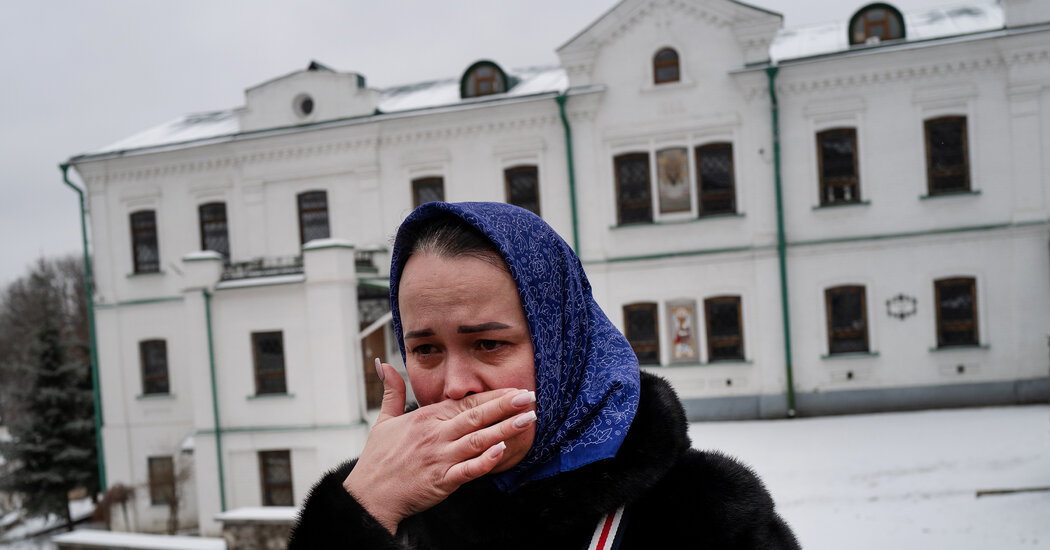 KYIV, Ukraine — Brushing aside international outrage, Russia widened its assault deep inside Ukraine on Tuesday, bombing civilian areas in the two biggest cities, amassing a miles-long convoy near the capital’s doorstep and warning an outside world intent on economic reprisals not to go too far.

The Russian attacks hit a hospital in Kharkiv — the second consecutive day of lethal Russian strikes on that eastern city’s civilian population — and a deadly blast struck a broadcasting tower in the capital, Kyiv, knocking out television and radio stations. A famous Holocaust memorial nearby sustained damage.

The escalation came amid rumors in Moscow and other Russian cities that the government might increase conscription to bolster its troop strength in Ukraine, where a surprisingly defiant resistance appears to have frustrated Kremlin expectations of quick victory. Now, the conflict in Ukraine looks as if it might become a more drawn-out fight that could plunge Europe into its worst refugee crisis of this century as hundreds of thousands of Ukrainians seek safety elsewhere.

With the Russian economy already reeling from an array of sanctions, associates of President Vladimir V. Putin reacted sharply to a declaration by France’s finance minister that Europe would wage “total economic and financial war” against Russia.

“Watch your tongue, gentlemen!” Dmitri A. Medvedev, a former Russian prime minister, declared on Twitter. “And don’t forget that in human history, economic wars quite often turned into real ones.”

On Tuesday, the sixth day of the invasion, satellite images showed a miles-long Russian military convoy making its way on a roadway north of Kyiv as a number of homes and buildings burned nearby. When it would make a move to enter the capital remained unclear.

The Kyiv transmission tower was struck after the Russian Defense Ministry had warned civilians to evacuate. Moscow said its military was engaged in “high-precision” strikes to “prevent information attacks against Russia.”

But damage from the strike also extended to Kyiv’s Babyn Yar Holocaust Memorial Center, built in a ravine where tens of thousands of Jews were killed by the Nazis during World War II. President Volodomyr Zelensky of Ukraine, who is Jewish, denounced the strike, which he said had killed five people.

“What is the point of saying ‘never again’ for 80 years, if the world stays silent when a bomb drops on the same site of Babyn Yar?” he said on Twitter.

In the main square of Kharkiv, an apparent rocket strike devastated a large administrative building, igniting a fireball and killing seven people, officials said. The city’s mayor said another rocket attack on a residential neighborhood had destroyed a hospital and left several people dead or maimed.

The Russian attacks came just hours before the Kremlin’s most powerful critic, President Biden, was scheduled to give his first State of the Union speech in Washington.

“What we are seeing is basically Phase II, which is a shift to much more brutal, tactless, unrestricted warfare, which will lead to many more civilian casualties and bloodier battles,” said Mathieu Boulègue, an expert in Russian warfare at Chatham House, a research group in London.

Mr. Zelensky, who has spoken to Mr. Biden several times since the invasion, accused Russia of war crimes for having deliberately targeted civilians in its bombardment of his country.

Now regarded as a hero in the West for his defiance of Russian bullying, Mr. Zelensky also reiterated Ukraine’s plea to join the European Union, in an emotional speech to European lawmakers made via video link. Prospects for that outcome are considered unrealistic.

“We have proven our strength,” he said through his English-language interpreter, who sobbed as he translated the words. “So do prove that you are with us. Prove that you will not let us go. Prove that you indeed are Europeans.”

Overnight, many of the capital’s 2.8 million inhabitants huddled in bomb shelters as air raid sirens wailed. Ukraine’s foreign ministry released a video Tuesday morning of children in a bunker singing the city’s anthem.

Many people, anticipating the worst, spent their time preparing. In a six-story Kyiv building, dozens of men in military uniforms, Kalashnikovs slung across their shoulders, worked with civilian volunteers to sort donations from Ukrainians who wanted to support the army. “We have received a lot of donations of medicine and hygiene equipment,” said one volunteer, Maria Pysarenko. “What we need most are helmets and bulletproof vests.”

Mr. Zelensky said that 16 Ukrainian children had died from Russian shelling over the first four days of fighting.

The slow pace of the Russian advance since the invasion began on Feb. 24 surprised some outside experts, who had expected a rout and the quick capture of major cities. But Moscow was clearly tightening its grip.

Videos showed Russian troops patrolling Kherson, in the south of Ukraine, although Ukrainians were still in control of the city, according to Janes, the defense intelligence research group. And in Mariupol, a critical port city, the mayor said residents lacked electricity and heat after days of intense fighting. Capturing Mariupol would allow Russian forces in the south to join with Russian-backed separatists in the east, isolating Ukrainian troops in the region.

The United Nations refugee agency warned that Europe would soon face its “largest refugee crisis this century.” In just the past 24 hours, it said, more than 150,000 Ukrainians had flooded across the borders, bringing the total number so far to about 660,000.

While the fleeing Ukrainians were generally met with a warm welcome, anger rose in the Middle East and Africa over what critics saw as a double standard, as seen in the hostile European reception afforded years earlier to many Syrians who had fled their country’s war. And there were numerous reports among Africans trying to leave Ukraine of harsh treatment by the Ukrainian emigration authorities who let Ukrainians exit first.

A second round of Russian-Ukrainian negotiations aimed at halting the conflict was scheduled for Wednesday, but that news was all but obscured by other developments that pointed to more fighting and Russia’s diminished international standing.

Migration wave. At least 660,000 people, most of them women and children, have fled Ukraine for neighboring countries, according to the U.N. refugee agency. It’s the most intense wave of European migration since at least the 1990s.

Supply chains. The invasion of Ukraine, a large country at the nexus of Europe and Asia, has rattled global supply chains that are still in disarray from the pandemic, adding to surging costs, prolonged deliveries and other challenges for companies trying to move goods.

The top court of the Council of Europe, an organization that includes Russia, ordered Moscow to “refrain from military attacks against civilians and civilian objects” and to “ensure immediately the safety of the medical establishments, personnel and emergency vehicles.”

At a United Nations Human Rights Council meeting in Geneva, about 100 diplomats, many from Western countries, walked out of a speech by Russia’s foreign minister, Sergey V. Lavrov, in protest of the invasion. That left a largely empty hall to hear Mr. Lavrov.

He had planned to attend the session in person, but spoke by video link instead, saying that the European bans on flights from Russia had prevented his travel.

Russia’s growing isolation was seen in other ways, too. Apple, the world’s most valuable company, suspended sales in Russia, joining other multinational businesses in protesting the invasion.

Andrei Kozyrev, a former Russian foreign minister known for his pro-Western approach, called on all Russian diplomats to resign in protest over their country’s “bloody fratricidal war in Ukraine,” urging them to act as “professionals, not as cheap propagandists.”

Some of Russia’s staunchest allies in Latin America have notably not endorsed the invasion. And on Tuesday, even China, which unlike many nations has refrained from denouncing the attack, seemed to put some distance between itself and Russia. China’s foreign minister, Wang Yi, who spoke to his counterpart in Ukraine, Dmytro Kuleba, called on Russia and Ukraine to seek a negotiated settlement and expressed concern about the harm to civilians.

In Russia, public alarm appeared to grow over how the sanctions imposed by the West would affect the country’s financial stability, with people rushing for the second day to withdraw cash from banks. And some took to the streets to protest the invasion — a remarkable display of defiance in a country where prosecutors sometimes seek prison sentences for demonstrators.

On Monday, the police detained at least 411 people in 13 cities, said one activist group, OVD-Info. To date since the invasion began, it said, there have been at least 6,435 detentions.

For all the harm the sanctions may portend for Russia, they are a double-edge sword, their effects rippling across the world economy.

With oil prices spiking to well above $100 a barrel, the International Energy Agency said Tuesday that member countries had agreed to release 60 million barrels of oil from emergency reserves. The agency said the aim was to send “a unified and strong message to global oil markets that there will be no shortfall as a result of Russia’s invasion of Ukraine.”

While hundreds of thousands of Ukrainians were fleeing, some expatriates were choosing another course: They were making their way back home.

“We have to rebuild Ukraine,” Daria Kliuieva, 23, said after arriving Tuesday at the Polish border town of Medyka, ready to cross back into her homeland. Nearby, a long line of people, mostly men, were also waiting to return.

Ms. Kliuieva took out her phone to show a photo of four young cousins bundled in jackets and blankets in a bunker back home. Six months ago, she landed a job cleaning rooms in a hotel in Gdansk, hoping to save enough money to buy an apartment back home in Kharkiv.

“That doesn’t matter anymore,” she said. 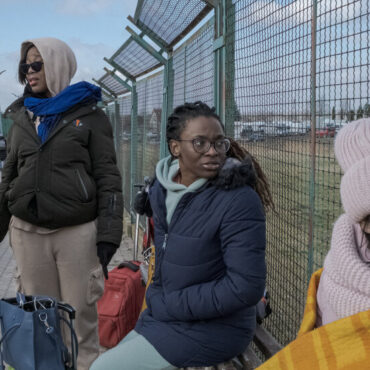 By Nailah Morgan and Rex Sakamoto •March 1, 2022As hundreds of thousands of people fled Ukraine amid Russia’s invasion, some international students said they were mistreated by authorities and that Ukrainians received preferential treatment while traveling on trains and crossing borders.Original story from https://www.nytimes.com