Russia’s Military, Once Creaky, Is Modern and Lethal 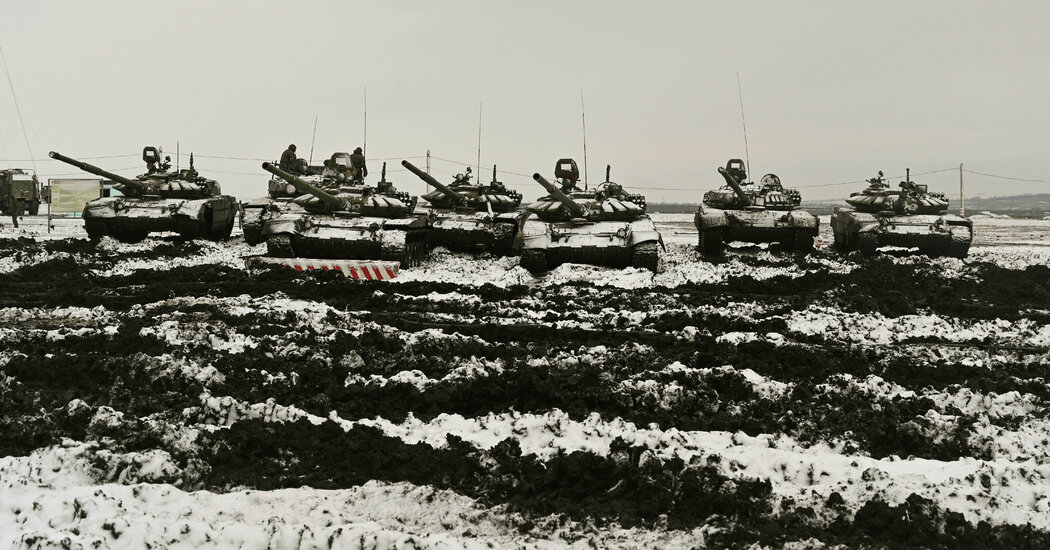 MOSCOW — In the early years of Vladimir V. Putin’s tenure as Russia’s leader, the country’s military was a hollowed-out but nuclear-armed shell.

It struggled to keep submarines afloat in the Arctic and an outgunned insurgency at bay in Chechnya. Senior officers sometimes lived in moldy, rat-infested tenements. And instead of socks, poorly trained soldiers often wrapped their feet in swaths of cloth, the way their Soviet and Tsarist predecessors had.

Two decades later, it is a far different fighting force that has massed near the border with Ukraine. Under Mr. Putin’s leadership, it has been overhauled into a modern sophisticated army, able to deploy quickly and with lethal effect in conventional conflicts, military analysts said. It features precision-guided weaponry, a newly streamlined command structure and well-fed and professional soldiers. And they still have the nuclear weapons.

The modernized military has emerged as a key tool of Mr. Putin’s foreign policy: capturing Crimea, intervening in Syria, keeping the peace between Armenia and Azerbaijan and, just this month, propping up a Russia-friendly leader in Kazakhstan. Now it is in the middle of its most ambitious — and most ominous — operation yet: using threats and potentially, many fear, force, to bring Ukraine back into Moscow’s sphere of influence.

“The mobility of the military, its preparedness and its equipment are what allow Russia to pressure Ukraine and to pressure the West,” said Pavel Luzin, a Russian security analyst. “Nuclear weapons are not enough.”

Without firing a shot, Mr. Putin has forced the Biden administration to shelve other foreign policy priorities and contend with Kremlin grievances the White House has long dismissed — in particular reversing Ukraine’s Westward lean in the post-Soviet period.

It is Mr. Putin’s highest-stakes use of the military to muscle Russia back into the global relevance it lost with the ending of the Cold War. Mr. Putin laid out that doctrine in 2018, when he used his annual state-of-the-nation speech to unveil new nuclear weapons that could fly 20 times the speed of sound.

“No one listened to us,” Mr. Putin said in his address, which included a video simulation showing a Russian missile heading toward the United States. “Listen to us now.”

Today, it is the overhaul of the conventional forces that has provided leverage in the Ukraine crisis.

The T-72B3 tanks amassed on Ukraine’s border have a new thermal optics system for nighttime fighting as well as guided missiles with twice the range of other tanks, according to Robert Lee, a U.S. Marine Corps veteran and Ph.D. candidate at King’s College in London, who is a Russian military expert. Kalibr cruise missiles deployed on ships and submarines in the Black Sea and Iskander-M rockets arrayed along the border can hit targets just about anywhere inside Ukraine, Mr. Lee said.

In the last decade, the Russian air force has acquired more than 1,000 new aircraft, according to a 2020 article by Aleksei Krivoruchko, a deputy defense minister. This includes the country’s most advanced fighters, the SU-35S; a squadron of these has been deployed to Belarus ahead of joint military exercises next month.

The new capabilities were evident in Russia’s intervention in Syria in 2015. They were not only effective, but caught some in the U.S. military off guard.

“I’m embarrassed to admit, I was surprised a few years ago when Kalibr missiles came flying out of the Caspian Sea, hitting targets in Syria,” said Lt. Gen. Ben Hodges, the former commander of the U.S. Army in Europe. “That was a surprise to me, not only the capability, but I didn’t even know they were there.”

Kremlin thinking has also evolved over the size of the armed forces. The military relies less on a dwindling number of conscripts and more on a slimmed-down, well-trained core of roughly 400,000 contract soldiers.

These soldiers receive better treatment. Visiting the Defense Ministry in December, Mr. Putin boasted that the average lieutenant now made just over the equivalent of $1,000 per month, better than the average salary in other sectors. The federal government, he added, was spending about $1.5 billion on subsidizing private housing for service members.

And all Russian soldiers are now required to be deployed with thick, military issued socks.

What is new is not just Russia’s upgraded equipment, but the evolving theory of how the Kremlin uses it. The military has honed an approach that Dmitry Adamsky, a scholar of international security at Reichman University in Israel, calls “cross-domain coercion” — blending the real or threatened use of force with diplomacy, cyberattacks and propaganda to achieve political aims.

That blended strategy is playing out in the current crisis around Ukraine. Russia is pushing for immediate wide-ranging concessions from the West. Russian troop movements into allied Belarus put a potential invasion force within 100 miles of Kyiv, the Ukrainian capital. Russian state media is warning that Ukrainian forces are the ones preparing acts of aggression.

And on Jan. 14, hackers brought down dozens of Ukrainian government websites and posted a message on one stating, “Be afraid and expect the worst.”

“You see some cyber, you see diplomacy, you see military exercises,” Mr. Adamsky said. “They are all related by design.”

Not all the forces arrayed along the Ukrainian border are Russia’s most advanced. The ones amassed in the north have older weaponry and are mostly there to intimidate and stretch Ukrainian resources, said Oleksiy Arestovych, a former Ukrainian military intelligence officer who is now a political and military analyst.

The more well-equipped and modernized units, he said, have moved into the area close to two breakaway provinces in Ukraine’s east, where Russia instigated a separatist war in 2014 that continues today.

It took Russia’s military transport planes only hours, for instance, to start ferrying about 2,000 Russian peacekeeping troops, along with heavy armor, to the Southern Caucasus after Mr. Putin brokered an end to the 2020 war between Azerbaijan and Armenia.

Russia used the war in Syria, experts say, as a laboratory to refine tactics and weaponry, and to gain combat experience for much of its force. More responsibility was delegated to lower-level officers, a degree of autonomy that contrasts with the civilian government structure in the Putin era. Defense Minister Sergei K. Shoigu said last month that all ground troop commanders, 92 percent of air force pilots and 62 percent of the Navy had combat experience.

“They showed to themselves and the whole world they are able to wage large-scale operations with precision weapons, and long-range weapons, and intelligence capability to support it,” Mr. Adamsky, the expert based in Israel, said.

For all its strides in recent years, Russia’s military retains a critical weakness of its Soviet predecessor: the civilian side of the country’s economy, nearly devoid of high-tech manufacturing and corporate investment in research and development. Army expenditures amount to a far higher percentage of the gross domestic product than in most European countries, starving other sectors.

When Ukraine’s military shot down Russian reconnaissance drones, for example, they discovered electronics and motors bought from hobby drone companies in Western Europe, according to a report published in November by Conflict Armament Research, a company based in Britain that specializes in tracing weaponry.

Russia possesses few new weapons systems fully created from the ground up, analysts say. Much of its modernization consists of refurbishments of older equipment.

But individual weapons systems are less important than the military’s innovative use of knowledge gained in each of the engagements of Mr. Putin’s tenure, said General Philip M. Breedlove, who was NATO commander when war broke out in Ukraine in 2014.

“The compliment that we have to pay to Russia is that they are a learning and adaptive force,” General Breedlove said. “Every time we see them in conflict, they get a little better and a little better.”

Mr. Putin was only a few months into his first presidential term when he faced a military catastrophe. On Aug. 12, 2000, a torpedo exploded inside the nuclear submarine Kursk, sending it to the Barents Sea floor with 118 sailors. The Russian Navy’s failed rescue mission, leading to the deaths of all aboard and an uncharacteristic mea culpa from Mr. Putin, underscored the military’s ineptitude.

The sinking came to define Mr. Putin’s first term, along with a vicious and bloody war in Chechnya where the Russian military struggled for years to quash an Islamist insurgency.

A major turning point came in 2008 when a long-simmering conflict over disputed territories in the Republic of Georgia exploded into war.

Russian forces quickly overwhelmed their much smaller Georgian neighbors, but the war uncovered deep deficiencies in the Russian military. Ground troops were not in radio contact with the Air Force, leading to several serious friendly fire attacks. Communications were so bad that some officers had to use their personal cellphones. Tanks and armored personnel carriers broke down frequently.

The failures prompted a massive shake-up of the Russian armed forces. The Soviet military’s prowess at land warfare was revived, with improvements such as revamped artillery technology, according to Mathieu Boulègue, a research fellow in the Russia and Eurasia program at Chatham House in London.

Just over a decade later, Russia’s tools of electronic warfare, which can be used to intercept or jam enemy communications and knock drones off course and out of the sky, are believed far superior to the U.S. military’s, analysts said.

“We’re playing catch-up now,” General Hodges said. “For the last 20 years, we were focused on iPhones or cellphones and terrorist networks, while they continued to develop substantial, powerful jamming and intercept capabilities.”

There have been some setbacks for Moscow, including unsettling weapons failures. In 2019, a prototype of a nuclear-propelled cruise missile — hailed by Mr. Putin as the centerpiece of a new arms race with the United States — blew up during a test, killing at least seven people and spewing radiation for miles.

But as the Kremlin’s rhetoric increasingly cast Russia as locked in an existential conflict with the West, little expense was spared. The investment in the military was accompanied by a militarization of Russian society under Mr. Putin, entrenching the concept of a motherland surrounded by enemies and the possibility of a coming war.

All those developments, analysts say, make it hard for the West to stop Mr. Putin from attacking Ukraine, if he is determined.

“There’s very little we can do to deny Russia’s ability to wage further warfare against Ukraine,” Mr. Boulègue said. “We can’t deter a worldview.” 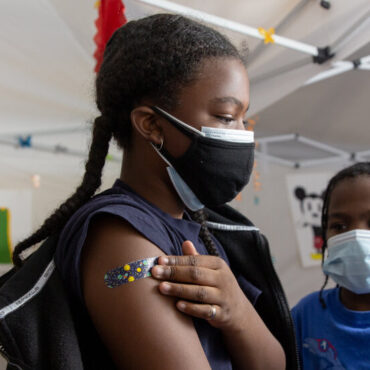 Yes, Omicron Is Loosening Its Hold. But the Pandemic Has Not Ended.

After a frenetic few weeks when the Omicron variant of the coronavirus seemed to infect everyone, including the vaccinated and boosted, the United States is finally seeing encouraging signs.As cases decline in some parts of the country, many have begun to hope that this surge is the last big battle with the virus — that because of its unique characteristics, the Omicron variant will usher Americans out of the pandemic.The […]