It felt sort of like old times, the other night at Sardi’s.

Joe Petrsoric, back in his familiar red jacket, was lining up martini glasses at the second floor bar where he has worked since arriving from Yugoslavia in 1972. Manning the front door, his traditional dark suit now accessorized with a face mask, was Max Klimavicius, who started working in the kitchen in 1974 after immigrating from Colombia; he now runs the place.

It had been 648 days since Sardi’s, a watering hole so closely entwined with Broadway that it was name-checked in the Rodgers and Hart song “The Lady Is a Tramp,” last served its cannelloni au gratin. And now, on the long night of the winter solstice, the oft-imperiled Main Stem mainstay with caricature-covered walls was ready to try again.

The timing is nerve-racking. The Omicron variant is rampaging through New York City, wreaking havoc in the theater industry.

There were 33 Broadway shows scheduled to perform Dec. 21, which Mr. Klimavicius chose for a soft reopening with limited hours, a limited menu and reduced capacity. But so many actors and crew members are now testing positive for the coronavirus that only 18 shows actually took the stage that night, and one of those made it to curtain only because the playwright grabbed a script and went on to replace an ailing performer.

“The place has to live,” said Mr. Klimavicius, who greeted customers like the long-lost friends many of them were, but also helped make sure they had proof of vaccination. “It’s part of the fabric.”

The restaurant is a combination of Broadway commissary and tourist magnet. As it reopened, the producer Arthur Whitelaw, who still remembers a childhood visit to Sardi’s more than seven decades ago (his parents were taking him to a new musical called “Oklahoma!”), settled into a cozy corner from which he could survey the room. A few tables away sat four friends from The Villages, the fast-growing retirement community in Florida, who were in town to see “To Kill a Mockingbird” on their annual Broadway trip.

Early in the pandemic, Mr. Klimavicius, like many, had his doubts — theater was dark, Midtown was dead, everything seemed uncertain. But this June, buoyed by $4.5 million from the federal government’s Restaurant Revitalization Fund, he began overhauling the space — redoing the kitchen, the gas lines, the ventilation, and the wiring, among other things — hoping to modernize it in a way that no one would notice. People who love Sardi’s are, to put it mildly, change-averse.

“I was concerned when I heard ‘renovation’,” said Andrea Ezagui, a Sardi’s regular from Long Island, who showed up at 4 p.m. — the moment it reopened — and immediately repaired to the bar upstairs, where she celebrated with champagne and friends. “They kept it the way it should be,” she said, “a little piece of heaven on Broadway.” 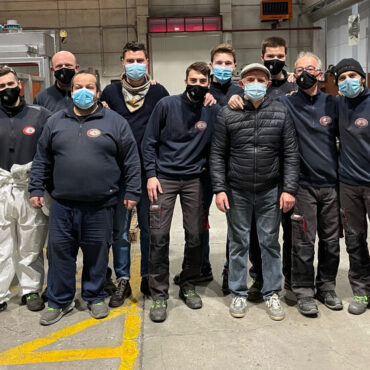 At 64, Alfredo Lupi, a janitor at a factory in Graffignana, an industrial town southeast of Milan, was less than three years away from his retirement, a threshold that was at once incredibly close but impossibly far.A cognitive impairment that he had suffered from almost since birth was making his job more difficult by the day. The condition was too debilitating for him to work without discomfort, but quitting would […]