See Where Covid Is Surging Across Europe 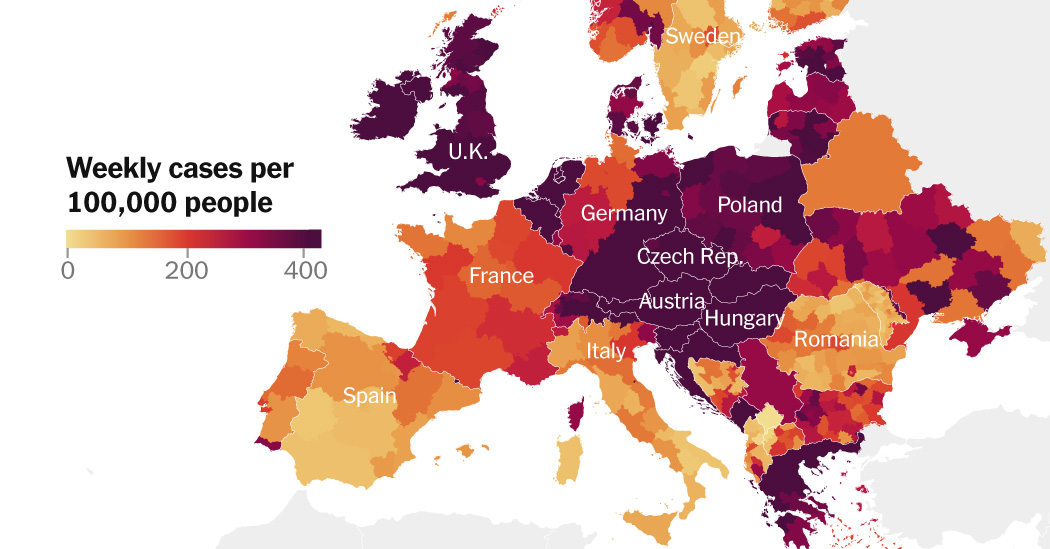 Europe is once again at the epicenter of the Covid-19 pandemic, with more cases being reported each day on the continent than at any previous point. In Austria, Germany and the Netherlands, infection rates have already surged to double those of last winter’s peak.

In response, governments have been forced to reimpose the types of strict restrictions that most Europeans thought were behind them. Lockdowns have been ordered in Austria and Slovakia, with bars, restaurants and nonessential shops closing in an effort to bring the countries’ outbreaks under control.

The emergence of the new Omicron variant, which the World Health Organization says could pose a higher risk of reinfection, has alarmed European leaders. Cases of the variant have so far been detected in travelers to more than 10 European countries, including Denmark, the Netherlands and Britain.

Speaking during a visit to Latvia, Ursula von der Leyen, the president of the European Commission, said that although it will take two to three weeks for scientists to get a full picture of the variant, the highest priorities should be social distancing and administering booster doses. “​​The general line is: Hope for the best, but prepare for the worst,” she added.

The winter surge has highlighted the disparities in vaccination rates across the continent. Even though cases have risen throughout the continent, it’s so far only in poorly vaccinated countries that deaths have reached the levels that followed similar surges last winter.

How the current wave compares with last winter’s peak

Source: Local governments and Johns Hopkins University.·Note: Deaths are shown shifted backwards by 14 days to reflect the typical delay between a positive test and a death.

Experts agree that the only way to break the current cycle of surges and restrictions is to improve vaccination rates.

Bruno Ciancio, head of surveillance for the European Centre for Disease Prevention and Control, said that while lockdowns are the sole choice for countries once the virus’s spread becomes unsustainable, they only help in the short term.

“At the same time as implementing such measures, it is imperative that everything is done to actually increase the level of protection in the population,” Dr. Ciancio said. “Otherwise, it will be just back and forth. And unfortunately, we are at risk of seeing this through the winter months.”

Older age groups are better protected across the continent, but vaccination rates in children still lag. The European Medicines Agency on Thursday approved the use of the Pfizer-BioNTech coronavirus vaccine for children ages 5 to 11, six months after it was approved in 12- to 15-year-olds.

Vaccination rates by age in Europe

Share of age group fully vaccinated. Bar width is proportional to the age group’s share of the total population.

Despite their low risk of hospitalization or death, unvaccinated children can fuel outbreaks in the wider population, as seen in England when infections in schools surged after pupils returned to class this fall. “If the virus circulates widely among younger people, it will unfortunately break through to older people as well,” Dr. Ciancio said. “And this will be more and more the case with waning immunity.”

Most European countries vaccinated seniors and health care workers in the early stages of their vaccination campaign, protecting them in the spring and summer, but leaving them more susceptible to waning immunity now.

Portugal, Europe’s most widely vaccinated country, has announced new measures and a return to the “state of calamity” that was lifted four months ago. In the first week in January, more restrictions will be put into effect during a “containment week” aimed at preventing a post-holidays spike in cases: Working from home will be mandatory for those who are able, bars will be closed and school vacations will be extended.

Many leaders are desperate to avoid strict restrictions that could harm their economies in the busy Christmas period. France is rolling out booster doses to all adults and will not renew health passes for those who refuse. At a press conference Thursday, the French health minister, Olivier Véran, said that “no lockdown, no curfew, no store closures, no travel restrictions” would be implemented. “We are making the choice to reconcile freedom and responsibility,” he said.

New restrictions have been met with resistance in many countries. About 40,000 people protested in Austria on Nov. 20 following the announcement of a national lockdown and mandatory vaccination. On the previous day in the Netherlands, police officers fired warning shots and used water cannons against hundreds of demonstrators who set fires in protest of the country’s partial lockdown, in which bars, cafes and shops now shut at 5 p.m.

The discovery of the new Omicron variant, classified by the World Health Organization on Friday as a “variant of concern,” has added an additional measure of urgency to European leaders’ efforts to curtail the continent’s surge in cases.

It will take time for scientists to determine whether the vaccines are still effective against the new variant, but the European Union has banned foreign travelers who have recently been in South Africa or Botswana, where the variant was first detected, or any of several neighboring countries. When the Chinese tennis star Peng Shuai accused a former top leader of sexual assault earlier this month, the authorities turned to a tried-and-true strategy. At home, the country’s censors scrubbed away any mention of the allegations. Abroad, a few state-affiliated journalists focused narrowly on trying to quash concerns about Ms. Peng’s safety.Beijing seems to be relying on a two-pronged approach of maintaining the silence and waiting for the world […]