Koci Selamaj, 36, drove to London from his home in Eastbourne on the south coast to carry out a premeditated attack on a woman with “extreme violence”.

The garage worker lurked around Cator Park in Kidbrooke, south-east London, before targeting 28-year-old Ms Nessa as she passed through on her way to meet a friend on September 17 last year.

CCTV footage captured the moment Selamaj attacked Ms Nessa by striking her over the head 34 times with a 2ft-long metal traffic triangle, before carrying her away unconscious.

He then pulled up her clothes, removed her tights and underwear and strangled her before covering her body in grass.

The body of Ms Nessa, who taught a year one class at Rushey Green Primary School in Catford, was found nearly 24 hours later near a community centre in the park.

Selamaj, from Eastbourne, East Sussex, was arrested in the seaside town and charged over her death days later.

In February, the Albanian national pleaded guilty to murder.

He will return to the Old Bailey on Thursday afternoon to be sentenced by Mr Justice Sweeney.

At an earlier hearing, prosecutor Alison Morgan QC said Selamaj had been violent towards his ex-partner in the past, including throttling her a number of times.

Three days before the attack on Ms Nessa, the defendant booked a room at the five-star Grand Hotel in Eastbourne, the town where he already had accommodation.

On September 17, he booked into the hotel and, two hours before the murder, contacted his former partner in a failed bid to engage her in sexual activity.

The defendant’s Nissan Micra was tracked by ANPR cameras and cell site evidence travelling to London.

He used his bank card at Sainsbury’s to buy a rolling pin, although it was never deployed as a weapon.

He entered Cator Park in Kidbrooke shortly after 8pm and lay in wait for half-an-hour before Ms Nessa arrived en route to The Depot bar where she was due to meet a friend.

Ms Morgan said: “The defendant is seen in effect loitering in locations around the park before spotting the deceased, checking to see if anyone else was nearby before turning and running after her.

“He is then seen to move towards the deceased and striking her repeatedly using a weapon which was approximately 2ft in length.

“The CCTV footage shows the defendant then carrying the deceased, who appeared to be unconscious by that point, up a bank and effectively out of sight.”

Selamaj’s actions afterwards were out of camera shot, but Ms Nessa was not seen alive again.

The prosecutor said: “The male did appear after 10 minutes.

“He is seen to pick up pieces of the weapon that had broken on the ground and then moved back to the area the deceased was located for another 10 minutes.”

The court heard he removed Ms Nessa’s underwear and tights and pulled up her clothes so her upper body was exposed.

Selamaj was also seen using wet wipes to clean a nearby bench.

En route back to the south coast, Selamaj stopped in the area of Tunbridge Wells in Kent where he disposed of the emergency triangle in the River Teise. 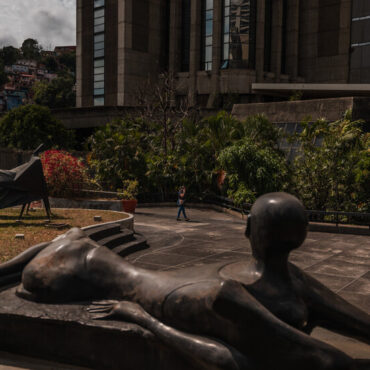 CARACAS, Venezuela — In a decaying housing complex filled with garbage-strewn hallways, shuttered shops and barren gardens lies one of Latin America’s greatest art treasures.The vaults above inundated basements contain the region’s largest public collection of Pablo Picasso’s works, as well as hundreds of millions of dollars worth of paintings and drawings by masters such as Joan Miró, Marc Chagall and Lucian Freud.Nearby, 700 sculptures by iconic artists, including Salvador […]