share close
email
This feature is part of CNN Style’s new series Hyphenated, which explores the complex issue of identity among minorities in the United States.

Destin Daniel Cretton is reflecting on what his younger self would have made of all this. His new movie tells the story of Shang-Chi, the first Asian superhero to lead a Marvel film. A Chinese character living in America, compelled to return. Negotiating two cultures under the weight of expectations, but remaining true to himself above everything. “I could have really used a hero like this,” the director says.

Shang-Chi, a Marvel superhero introduced in the comics in 1973, was never the most rounded character. In fact, many elements from his past are outright problematic. It took Cretton, the son of a Japanese American mother, David Callaham, an American screenwriter of Chinese descent, and Chinese-born, Canadian-raised actor Simu Liu to change that. In “Shang-Chi and the Legend of the Ten Rings” they have redefined the “Master of Kung Fu,” making him fit for a modern, global audience and, Cretton hopes, an inspiration for a new generation.

Featuring a predominantly Asian and Asian American cast including Tony Leung, Michelle Yeoh and Awkwafina, Cretton’s film marks an exciting new chapter in Marvel’s history, while paying homage to the kung fu films that have influenced decades of action movies in Western cinema.

Ahead of the film’s release, CNN asked the director in a video interview about all the action in front and behind the camera.

The following interview has been edited for length and clarity.

Shang-Chi, played by Simu Liu in Marvel Studios’ “Shang-Chi and the Legend of the Ten Rings.” Credit: Jasin Boland/Marvel Studios

CNN: You’re a director entering this empire that is the Marvel Cinematic Universe for the first time. How did you approach the introduction? And how did you put your own stamp on the project?

Destin Daniel Cretton: It was pretty nerve-wracking going in to do the pitch. There is the natural tendency to try to imagine what would Marvel want. That was actually counterintuitive to what I should be doing. It took me a while to realize the only reason to do a giant movie like this is to pitch them something that is really personal to me, and something that I would want to do even if I wasn’t doing a big studio movie. So I went in pitching them a family drama that was wrapped in the spectacle of a kung fu martial arts movie. And, surprisingly, I got the gig.

CNN: You have a lot of new characters to introduce to audiences in a short space of time. You also don’t want to cut corners. How did you approach that challenge in the screenwriting?

Cretton: It is a lot to squeeze into two hours and 10 minutes. Our first cut of the movie was three hours long. A lot of it is done in the editing room, trying to find what the right pacing is, how much information is actually repetitive, what you can get away with not saying, and what actually helps when you cut it out. It’s difficult to introduce a new character and try to add dimension to all of these characters, who could so easily fall into stereotypical traps. That was the primary thing that we were really hoping we would not be contributing to: previous stereotypes. We were carrying the burden of (that) into this movie.

From left: Meng’er Zhang as Xialing, Simu Liu as Shang-Chi and Awkwafina as Katy. “If you lined up all of our actors, they all are drastically different personalities, from very different backgrounds,” says the director. Credit: Jasin Boland/Marvel Studios

CNN: A big part of Simu Liu’s and Awkwafina’s characters, Shang-Chi and Katy, is their refusal to be pigeonholed into a definition of who they are and what they might want to do — which cultural identity they should be aligning with. How important was that for you? What conversations did you have with the cast to explore these ideas?

Cretton: A big part of the casting process was finding actors who I knew would identify with these characters in some way through their lived experience. If you lined up all of our actors, they all are drastically different personalities, from very different backgrounds. For whatever reason, Asian characters in cinema in the past have not captured the variety of personalities that I know in my everyday life. That’s what we wanted to try to capture in this movie.

Michelle Yeoh as Ying Nan and Simu Liu as Shang-Chi in one of the fight scenes in “Shang-Chi and the Legend of the Ten Rings.” Credit: Marvel Studios

CNN: We have to talk about the action sequences. They’re some of the most exciting in any Marvel film. You had the late stunt coordinator Brad Allan (“Gorgeous,” “Kick Ass”) on board, Andy Cheng (“Rush Hour”) as fight coordinator, and Bill Pope (“The Matrix”) behind the camera. Can you walk us through the choreography and the storytelling behind these scenes?

Cretton: The process started with location. All of my favorite fight scenes or action sequences in cinema can usually be described with one word: the location. It really was a huge collaboration with Brad Allan and his incredible team. He was given the scenario “runaway bus,” we have some beats of the plot mapped out, and then they just go off and start doing their magic.

I, like maybe many other people, tune out quite often when it comes to action. In this movie, I wanted to make sure that the characters and the storyline was constantly moving through every action sequence. That happened to be very much in line with the way Brad Allan thinks and his choreographers think. They are filmmakers and storytellers first, and then come the beautiful martial arts and everything that they have learned through being part of Jackie Chan’s stunt team.

CNN: Can we talk about some of the reference points?

Cretton: The references are endless, going back to movies like “36 Chambers (of Shaolin),” to the fun, zany tone of “Kung Fu Hustle.” The really fun part of working with this team was referencing movies that they did. I could talk to Andy and reference a Jackie Chan movie and then he’d pull up a clip and say, “Oh, yeah, that’s me right there.” Their knowledge of the history of this genre and their deep respect for the art form was really what we were leaning on.

CNN: I read you had some reservations when you first started this journey.

Cretton: I never thought that at this point in my career I would be doing a giant blockbuster movie — and I had no desire to do that at this point, until I saw that they were looking for directors for this particular character. I would have kicked myself if I didn’t at least try to be a part of that conversation; to create a character that a generation of kids who look like me, or have a similar cultural background as me, would be able to have something that I did not have as a kid.

CNN: What would a young Destin have made of Shang-Chi?

“Shang-Chi and the Legend of the Ten Rings” is released in cinemas worldwide on September 3. 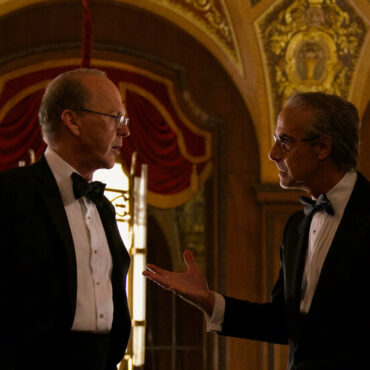 The Best Movies and TV Shows New to Netflix, Amazon and Stan in Australia in September

SEPT. 6‘Billions’ Season 5, Part 2This popular drama about the rivalries of the mega-rich was in the middle of another great season last year when COVID-19 shut down production. The creative team was finally able to reassemble to shoot the last five episodes, continuing a story which has seen the venture capitalist Bobby Axelrod (Damian Lewis) try to buy respectability by founding his own bank, while the ruthless U.S. attorney […]