Delving into the archives of pop culture history, “Remember When?” is a new series offering a nostalgic look at the celebrity outfits that defined their eras.

Remember when being British was cool?

It was the late 1990s and, during a brief window of respite between Thatcherism and the War on Terror, the UK was awash with optimism. Its economy boomed, the dot-com bubble appeared impenetrable, and the most pressing concern among the Brits was whether the millennium bug might send fax machines into meltdown.

The Spice Girls emerged into a coinciding era of cultural confidence, dubbed — without a hint of irony — “Cool Britannia.” The five-piece, and other British bands, enjoyed levels of global success not seen since The Beatles. And the young stars weren’t afraid to flaunt their Britishness.

Enter one of the most memorable dresses in pop — and fashion — history: Geri Halliwell’s Union Jack dress, worn on stage at the 1997 Brit Awards, the UK’s equivalent to the Grammys. This was long before the flag became a Brexit battleground. What would, today, be dismissed as garish act of patriotism was somehow symbolic of the bold, blithe zeitgeist.

If Ginger Spice epitomized a new type of pop star — one that cackled through TV interviews and flirted with Prince Charles — then her daringly short dress, with its low rectangular neckline, embodied a new type of Britishness, free from stuffy, stiff-upper-lip associations.

Deeming her original dress to be “boring,” Halliwell asked her sister to stitch a Union Jack dishcloth to its front. Credit: Dave Benett/Getty Images

At best, the dress reclaimed femininity on behalf of the legions of young women inspired by the band’s pervasive “Girl Power” message. At the very least, it demonstrated Halliwell’s nous for generating headlines. Her bandmate, Melanie “Scary Spice” Brown, later said: “That was the first time I realized how brilliant Geri was. She had a real sense of what would catch on in the press.”

Because although late-1990s Britain was a time of plenty, the era’s best-known outfit was, in fact, an ingenious act of DIY: Halliwell had deemed her original black Gucci dress to be “boring,” and so had asked her sister, Karen, to stitch a Union Jack dishcloth to its front (the back was emblazoned with an often overlooked peace symbol).

She faultlessly captured the national mood, and the dress’ historic status was confirmed almost immediately. Pictures of Halliwell were splashed across the front pages of the country’s then-untouchable tabloid newspapers the next morning. Just a year later, the garment — arguably little more than an upcycled rag — was bought by Hard Rock Café’s co-founder Peter Morton for £41,320 (then just under $70,000), making it the most expensive item of pop-star clothing ever to sell at auction.

Subsequent attempts to replicate the dress’ impact have fallen flat. In 2006, Italian designer Roberto Cavalli made Halliwell an updated Union Jack frock, complete with rhinestones and Swarovski crystals, for the Spice Girls’ first reunion tour. Six years later, the singer herself launched a collection of flag-themed clothing via the fast-fashion retailer Next, though it quickly disappeared from sight.

Then, at 2019’s UK reunion tour, Geri surprised fans with a billowing, floor-length reinterpretation of her signature dress. But, rather than putting a demure spin on a risqué classic, the sparkly gown left Halliwell (now known as Geri Horner) looking like a medieval superhero.

The original Union Jack dress was, inescapably, a product of its time. In a period of national soul-searching, it seems fitting that Britain’s most pertinent symbol of cultural self-assurance should remain in the closet, shunned in favor of something deemed more “age-appropriate.” 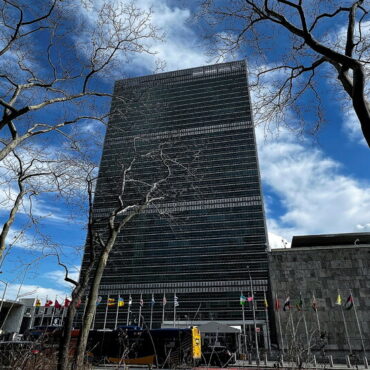