Situated near the border between the Piedmont region of Italy and France, visitors either need to fly to Turin, and take a train and then a bus, or drive south from Provence in order to reach it.

Those who do make the trip here would be forgiven for wondering if they’re in the right country, particularly when locals bid them goodbye with the unfamiliar “arveire” rather than “arrivederci.”

The official language of Coumboscuro is Provençal, an ancient medieval neo-Latin dialect of Occitan, the language spoken across the Occitania region of France.

Only around 30 or so people live in the village, and life is far from easy for locals. Coumboscuro is largely made up of shepherding families, who frequently find their herds under attack from the wolves who roam here.

The electricity is often out for weeks during the winter time, while the internet connection here is minimal.

But the village’s quiet, mountain meadows and bright purple lavender fields are ideal for visitors looking for an unplugged retreat, as are the breathtaking views from its Alpine peaks, which stretch to the Cote d’Azur.

Forget bars, supermarkets and restaurants, any social buzz is limited to the occasional folklore events that take place in the village, or when day trippers embark on solitary weekend mushroom hunts.

Shepherdess Agnes Garrone is one of a small number of residents of the Italian village of Coumboscuro.

Locals embrace a slower-paced, simple lifestyle in harmony with nature.

“We don’t have a TV. You don’t really miss what you’ve never had in the first place. When there’s a power outage for 15 days in a row, there’s no reason to panic: we dig out our grandparents’ old oil lamps,” local shepherdess Agnes Garrone, 25, tells CNN Travel.

“I’m used to waking up at dawn to tend the sheep. I work 365 days per year, zero holidays. I know no Christmas nor New Year’s Eve, because even during festivities, my herds need to eat and be looked after.

“It’s a life of sacrifice but it’s so rewarding when you see the birth of a lamb.”

Garrone runs La Meiro di Choco, an old farm that happens to be the only B&B in Coumboscuro.

Those who book in get to bed down in traditional wooden huts sample fresh produce from the orchard and have the option to buy premium wool of an indigenous Italian sheep called Sambucana, also known as Demontina.

While many of the village’s younger residents fled in search of a brighter future elsewhere many years ago, Garrone and her brothers decided to stay and work on their ancestors’ land.

Their mother grows cannabis and other herbs for medicinal purposes, and makes syrups from elder leaves and dandelions.

“Visitors are welcome to come stay with us, we need people to discover our world, we don’t want to be forgotten and we have so much heritage to share,” says Garrone.

The 25-year-old considers Provençal, which is often characterized as something of a mix between French and Italian, to be her mother tongue rather than Italian.

She explains that being a part of a socio-cultural and linguistic community that hails back centuries provides her with a strong sense of identity and territorial belonging.

The area of the Piedmont region where Coumboscuro is located passed between Italian and French rule several times in history, which goes some way to explain while locals like Garrone feel neither Italian nor French – simply Provençal.

Surrounded by forests of hazelnut and ash trees, it’s divided into 21 minuscule hamlets scattered across the pristine Valle Grana, each made of just a handful of stone and wooden dwellings.

Its main district, which consists of just eight picturesque wooden cottages with frescoed walls clustered around an old chapel, was founded in 1018 by French monks who recovered the lands for rural use.

Although Coumboscuro flourished for many years, things began to change in the 1400s, when harsh winters saw many families move to Provence for much of the year and only return during the summer.

The village’s population has dwindled for many years, but Coumboscuro underwent something of a revival in the 1950s when Garrone’s grandfather, Sergio Arneodo, took over as the village school teacher.

After studying the ancestral local tongue, he helped to recover the linguistic roots and folklore appeal of the Provençal language, providing the community with a much-needed boost.

Roumiage, a spiritual pilgrimage from Provence to Coumboscuro, is held here every year.

Those interested in learning more can visit the Coumboscuro Ethnographic Museum, while the center for Provençal studies holds Provençal language and writing courses for adult beginners as well as children.

Each July, thousands of Provençal-speakers dressed in traditional attire embark on the Roumiage, a spiritual pilgrimage departing from Provence in south France along the Alps to Coumboscuro.

The journey takes them across snowy peaks, steep canyons and chestnut forests, the same route previously traveled by their ancestors, as well as medieval traders, outlaws and cross-Alpine smugglers over the years.

Once they arrive in Coumboscuro, the pilgrims are greeted by a huge festival, with tents and barns set up as temporary accommodation.

Although population decline has continued to plague the village, its residents, now more aware of their roots, have developed a primeval attachment to their hometown. Today, many view Coumboscuro as a cradle of the Provençal microcosm.

School teacher Sergio Arneodo helped to recover the linguistic roots of the Provençal language during the 1950s.

“Scholars, intellectuals and artists gather here for art exhibitions and conferences to discuss our rich heritage.”

Following awareness campaigns by the local community, Italy officially recognized the existence of the Occitan minority in 1999, and Provençal is now protected by national law.

“This is one of the few valleys in the world where our tongue survives,” adds Arneodo, who is also Garrone’s uncle, as well as the son of Sergio Arneodo.

“In the past it was a lyrical, literary language spoken by roaming court minstrels which then fell into oblivion but here, thanks to my dad’s efforts, youth recovered their ancestors’ heritage and many decided to stay.”

Residents are extremely proud of their heritage and have a strong attachment to their hometown.

Witches and shamans play a huge role in the Provençal world, as does great Alpine food, and there’s definitely a magical vibe to Coumboscuro.

In fact, legend has it that a number of locals were gifted with the power to heal broken bones and twisted ankles.

Some even believe the woods are inhabited by fairies and fauns called Sarvan, who are not only said to have taught locals how to make butter as well as Toma and Castelmagno cheese, but apparently also play jokes on the farmers by stealing their fresh milk and bags full of nuts.

As for local cuisine, some traditional recipes include La Mato, or “the crazy one,” consisting of rice, spices and leeks, as well as bodi en balo smoked potatoes, which is heated in the fireplace in an ancient ritual.

Aioli, a Mediterranean garlic-based sauce, is popular as an accompaniment to classic dishes. Dandeirols — a homemade maccheroni served with whip cream and nuts — are another stand out. 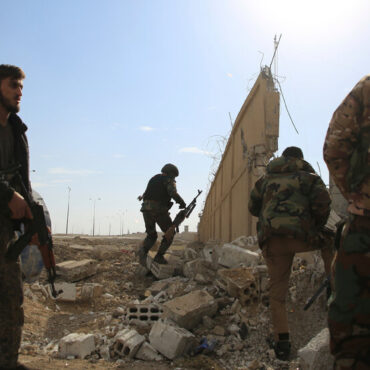 BAGHDAD — An American-backed militia that has waged four days of deadly battles to dislodge Islamic State fighters from a prison in northeast Syria warned on Sunday that the jihadists were using more than 600 boys detained in the complex as “human shields.”The United States has dispatched attack helicopters and carried out airstrikes on the prison to help the Kurdish-led militia, known as the Syrian Democratic Forces, reassert control. Some […]