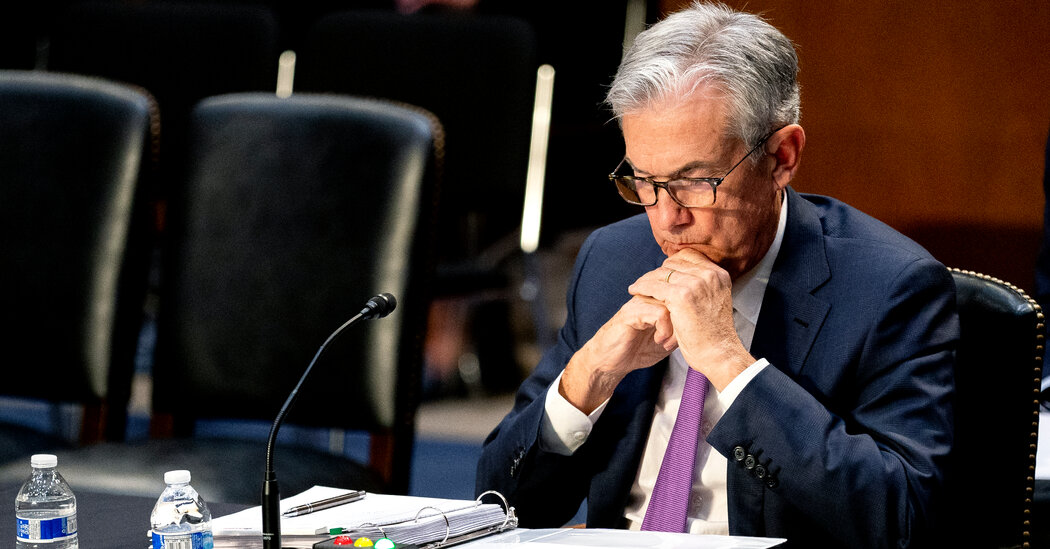 The world’s top central bankers acknowledged that inflation, which has spiked higher across many advanced economies this year, could remain elevated for some time — and that though they still expect it to fade as pandemic-related supply disruptions calm, they are carefully watching to make sure that hot price pressures do not become more permanent.

Jerome H. Powell, the Federal Reserve chair, spoke Wednesday on a panel alongside Christine Lagarde, president of the European Central Bank; Andrew Bailey, governor of the Bank of England; and Haruhiko Kuroda, head of the Bank of Japan.

Mr. Powell noted that while demand was strong in the United States, factory shutdowns and shipping problems were holding back supply, weighing on the economy and pushing inflation above the Fed’s goal of 2 percent on average.

“It is frustrating to acknowledge that getting people vaccinated and getting Delta under control, 18 months later, still remains the most important economic policy that we have,” Mr. Powell said. “It is also frustrating to see the bottlenecks and supply chain problems not getting better — in fact, at the margin, apparently getting a little bit worse.”

“We see that continuing into next year, probably, and holding inflation up longer than we had thought,” Mr. Powell said.

The Fed chair’s comments aligned closely with those of Mr. Bailey and Ms. Lagarde, who also cited uncertainties around persistent supply-chain bottlenecks as a risk.

“We’re back from the brink, but not completely out of the woods,” Ms. Lagarde said of the economic rebound. “We still have uncertainty.”

She said supply-chain disruptions were accelerating in some sectors, while energy price increases were an area to watch, along with potential new waves of the coronavirus pandemic that might be vaccine-resistant.

“Monetary policy can’t solve supply-side shocks,” Mr. Bailey said. “What we have to do is focus on the potential second-round effects from those shortages.”

The joint appearance of some of the world’s most powerful economic officials, sponsored by the European Central Bank, came during a turbulent week in financial markets. While stocks were rebounding on Wednesday morning, they had fallen sharply on Tuesday as government bond yields rose. Investors have been shaken by a political standoff over the debt ceiling in the United States, problems in China’s heavily indebted property sector, the reality that global central banks are preparing to dial back economic support and the possibility that recent rapid price gains might last.

The burst in inflation has swept Europe and the United States this year as consumer demand booms but factory shutdowns and shipping snarls keep many goods in short supply. Central bankers have consistently argued that those price increases will prove temporary. As businesses adjust to the postpandemic recovery, they say, supply-chain kinks will unravel. And while consumers have been spending down savings stockpiled during the pandemic and padded by government stimulus, those will not last forever.

But economic officials have increasingly acknowledged that while they expect the inflationary pop to be temporary, it may last longer than they initially anticipated.

In the United States, consumer price inflation came in at 5.3 percent in August, and the Fed’s preferred inflation gauge — the personal consumption expenditures, or P.C.E., index — grew 4.2 percent in the year through July. August P.C.E. data is slated to be released on Friday.

Consumer prices are expected to peak “slightly above” 4 percent later this year in Britain, double the central bank’s target.

Elsewhere in Europe, inflation is also high, though the jump has not been as large. Euro-area inflation came in at 3 percent in August, the highest reading in roughly a decade. But price gains there are expected to slow more materially over the coming years than in Britain and the United States.

Japan is a notable outlier among developed economies, with slow demand and inflation near zero. Weak inflation leaves central banks with less room to help the economy in times of trouble, and can fuel a cycle of economic stagnation, making it a problem.

Central bankers in continental Europe, Britain and America have been wrestling with how to respond to the jump in prices. If they overreact to inflation that is temporarily elevated by factors that will soon fade, they could slow labor market recoveries unnecessarily — and may even doom themselves to a future of too-low inflation, much like the situation Japan faces.

But if shoppers come to expect consistent inflation amid today’s burst, they may demand higher wages, fueling an upward cycle in prices as businesses try to cover climbing labor costs.

Monetary policymakers want to avoid such a situation, which could force them to raise interest rates sharply and spur a serious economic slowdown to tank demand and tame prices.

“There’s a tension between our two objectives: maximum employment and price stability,” Mr. Powell said. “Inflation is high, well above target, and yet there appears to be slack in the labor market.”

“Managing through that process over the next couple years, I think, is the highest and most important priority, and it’s going to be very challenging,” he added.

For now, most top global officials are preaching patience, while moving to gradually reorient their policies away from full-blast economic support. The Fed is preparing a plan to slow its large-scale bond buying, which can keep money pumping through the financial system and lower many types of borrowing costs, even as its policy rate remains at rock bottom. The Bank of England has signaled that policy will need to be tightened soon, and the European Central Bank is slowing its own pandemic-era purchase program.

“The historical record is thick with examples of underdoing it,” Mr. Powell said, noting that economic policymakers tend to underestimate economic damage and under-support recoveries. “I think we’ve avoided that this time.”

Written by Lianne KolirinLeah Dolan CNNLondonIt may have been a long time coming, but Tuesday's world premiere of the new James Bond film did not disappoint. Stars of screen and stage turned out alongside British royalty for the glittering "No Time to Die" red carpet event at London's Royal Albert Hall. Britain's Kate, the Duchess of Cambridge, speaks to British actor Daniel Craig upon arrival for the world premiere of […]