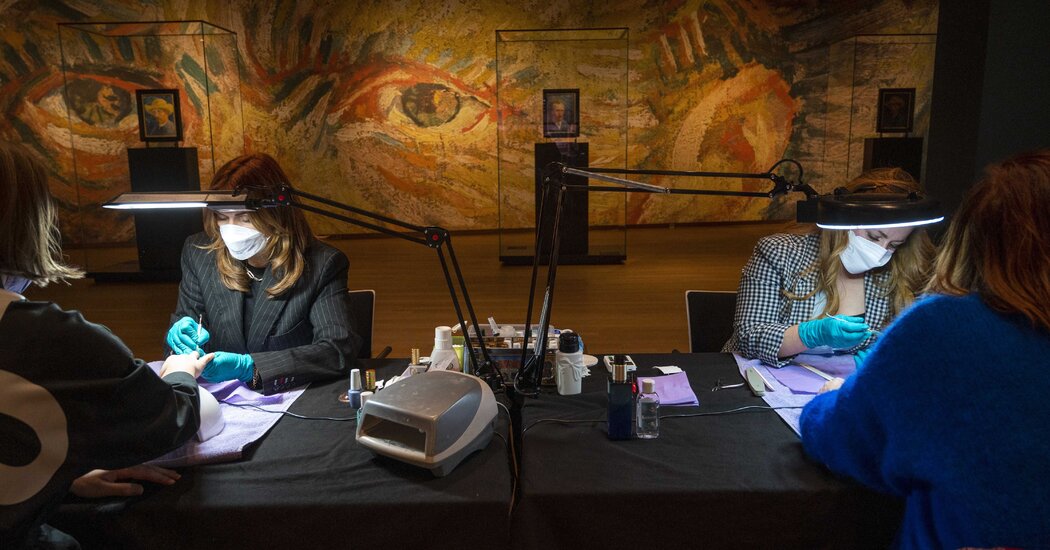 Dozens of theaters and museums in the Netherlands planned to open as hair salons and gyms on Wednesday in what was billed as a playful protest over a continued nationwide lockdown in the arts sector even as restrictions on some businesses were reduced.

The country entered a full lockdown in December, fearing that a rise in cases would overwhelm its relatively small intensive care capacity. And although the government relaxed some of the measures last week — reopening nonessential shops until 5 p.m. as well as gyms, hairdressers, nail salons and brothels — Prime Minister Mark Rutte said that cinemas, museums, theaters and concert venues would remain closed.

In response, dozens of arts organizations joined a protest that they named “Theater Hairdresser,” in which theaters open as hair salons and some museums are opening their doors as gyms. The Van Gogh Museum in Amsterdam was offering beard trims, haircuts and manicures, with an option of “Van Gogh inspired nail art.”

“And waiting at the hairdresser’s has never been more fun,” the organizers’ website said, referring to being organized at theaters involving several Dutch celebrities.

The Netherlands reported almost 243,000 new virus cases over the past week, up from almost 202,000 the week before, according to government data. But hospitalizations are falling: Last week, 647 Covid patients were admitted to the hospital, down from 940 the week before.

“The priority isn’t clear,” Sanne Wallis de Vries, a comedian who is an organizer of “Theater Hairdresser,” told a Dutch talk show on Tuesday, saying that she didn’t understand why theaters had to remain closed while stores were allowed to open.

Mayor Femke Halsema of Amsterdam said she that would not allow the protest and that lockdown rules would be enforced in the city.

But Ms. Wallis de Vries said: “This is only playful. This only fun.”

“What do you gain by prohibiting it?” she asked.

Written by Isabelle Jani-Friend, CNNA 555.55-carat black diamond that is truly from out of this world has been unveiled by auction house Sotheby's Dubai.The rare gem, which Sotheby's has dubbed "The Enigma," is believed to have come from outer space -- either created from a meteoric impact or from a "diamond-bearing" asteroid that collided with Earth. A natural faceted black diamond of this size is an "extremely rare occurrence," according […]