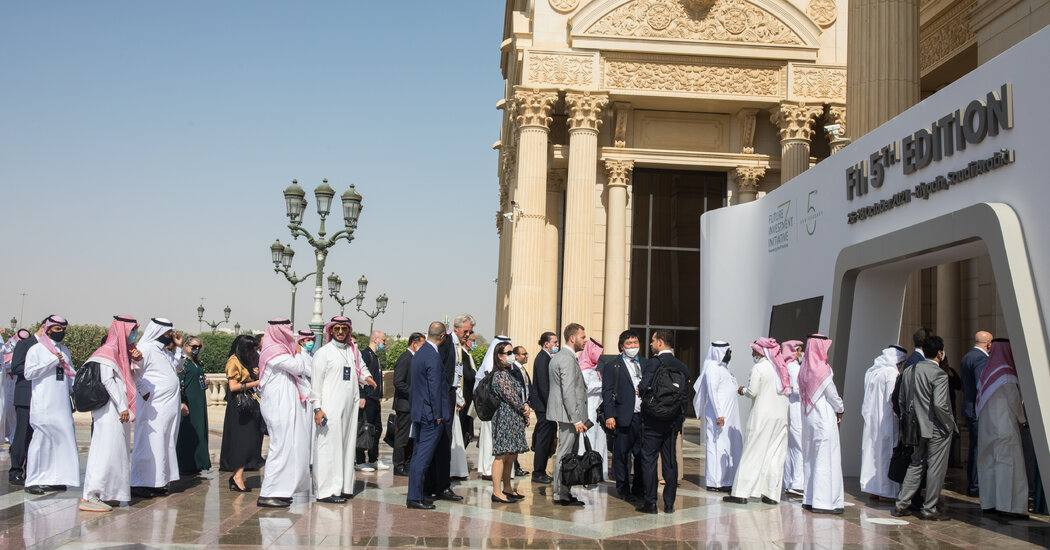 RIYADH, Saudi Arabia — The wealthy and the powerful of the financial world descended on the Ritz-Carlton in Riyadh this past week for Saudi Arabia’s annual investment conference, a reminder that even amid shifting politics, diplomatic strains and pandemic constraints, money is a surefire magnet.

Executives hugged and fist-bumped in the lobby of the hotel, where four years ago the kingdom’s crown prince, Mohammed bin Salman, confined hundreds of his nation’s elites in an anti-corruption crackdown. They sipped coffee and mineral water in the hotel’s cafes.

They piled into a string of black sedans for dinners with clients and colleagues around Riyadh. They even made jovial conversation in the Ritz’s makeshift clinic, where the queue for the Covid-19 tests required to return home to other countries stretched at times to an hour or more.

But global politics poked through at times.

In sideline conversations, some U.S. business leaders spoke in stage whispers of the drugging and dismemberment of the dissident journalist Jamal Khashoggi in 2018 — a killing that an American intelligence report concluded had been approved by the crown prince, known by his initials, MBS. Yet when the crown prince made a brief appearance at the conference on Tuesday, he was welcomed with a standing ovation.

There was also a message in the list of attendees.

Steven Mnuchin, the Treasury secretary under President Donald J. Trump, walked the halls between a fireside chat with the Bahraini finance minister and a series of meetings. The private-equity executive Stephen Schwarzman, a loyal adviser to Mr. Trump until late in his presidency, bemoaned the vilification of fossil fuel companies from the conference dais. The longtime chemical executive Andrew Liveris, who had been an adviser to Mr. Trump on manufacturing, praised Saudi Arabia’s economic expansion plans on the sidelines of the gathering.

Guests affiliated with the Biden administration, which has adopted a chillier posture toward the Saudis than did Mr. Trump, were in far shorter supply. Treasury Secretary Janet Yellen did not attend. Nor did officials from the White House or the State Department. The sole Biden official who spoke at the conference was Don Graves, deputy secretary of commerce. Mr. Graves met privately with the Saudi commerce minister and participated in a fifteen-minute panel discussion on the topic of global trade. He was whisked away by a coterie of aides immediately after that and declined to answer questions about the event.

For many of those in attendance, the big draw was Saudi Arabia’s $450 billion sovereign wealth fund, the Public Investment Fund, whose governor, Yasir al-Rumayyan, typically hosts the event.

Allocating money into foreign investment funds has always been a part of Saudi Arabia’s strategic tool kit. It’s a tactic the kingdom has relied on heavily in recent years, as the crown prince has sought to encourage overseas investment into his home country to fund Vision 2030, his blueprint for economic growth and diversification. His philosophy appears to be that by sharing Saudi wealth in markets like the U.S., Britain, Japan and Russia, he is inviting those countries to reciprocate.

During the Trump era, that approach was welcomed. Mr. Trump selected Riyadh as the location of his first state visit in 2017; with his encouragement, a flurry of U.S.-Saudi business deals — including a package of arms sales to the kingdom that was predicted to generate $110 billion over a ten-year period — were announced during the trip.

Under Mr. Biden, however, business relationships have been far less of an emphasis, and relations with the Saudis and the crown prince far more complicated. “I don’t think anything’s broken that badly that it can’t be repaired, but there’s perception issues,” said Mr. Liveris, who also advised the Obama administration when Mr. Biden was vice president.

That has not appeared to have impeded the warmer connections between Mr. Trump’s team and the Saudis.

Mr. Mnuchin, who started a $2.5 billion investment fund in July, has already raised money from the Saudi sovereign wealth fund. Jared Kushner, Mr. Trump’s son-in-law and former senior adviser, is launching an investment firm called Affinity Partners, which has signaled interest in a potential investment from the Public Investment Fund, according to someone familiar with Mr. Kushner’s plans. (A recent report pegged the potential size of that investment at as much as $2 billion.)

Mr. Kushner, who was recently in the Middle East for events related to his charitable entity, the Abraham Accords Institute for Peace, did not attend the conference. But he is actively assembling an investment team for his new fund, and there is no indication that the close rapport he developed with Prince Mohammed during his father-in-law’s administration has diminished since Mr. Trump left office.

One Middle East-based financier, who attended the conference but spoke on condition of anonymity because of the sensitive topic, said the Saudi funding of Mr. Kushner’s new initiative would be in line with his region’s embrace of “soft power.” He was referring to the leverage that comes from providing financial assistance to people who are in the sphere of influence with current and former politicians and their parties.

In the U.S., there is no law to restrict or prohibit former executive-branch officials from receiving investment money from foreign counterparts after leaving their government jobs. But ethics experts say that deals like Mr. Mnuchin’s, which occurred just months after he left the Treasury Department, would be well served by the same sort of mandatory cooling-off periods that prevent members of Congress and executive branch officials from lobbying their former colleagues after they leave government.

“People are in government temporarily as public employees, and they’re doing deals and lots of favors for people, including foreign countries. Then they go out into the private sector and are finding they made a lot of friends in government and now they’re being rewarded,” said Richard Painter, the former chief ethics counsel to President George W. Bush. “It’s very worrisome.”

Mr. Mnuchin declined to comment on whether he feared the perception of a conflict of interest at the conference. Mr. Kushner did not respond to a request for comment.

One notable no-show was Mr. al-Rumayyan, the Saudi official who oversees the kingdom’s sovereign wealth fund. He did not deliver his opening remarks or preside over scheduled panel discussions with Wall Street chief executives.

A spokesman for the wealth fund did not respond to questions about Mr. al-Rumayyan’s absence, but four attendees with close ties to him said he had tested positive for Covid-19. He was even absent from the week’s signature evening get-together: an opulent dinner for scores of event speakers at his home in Riyadh, the capital.

Blackstone’s Mr. Schwarzman was attending the conference for the third time, paying his respects to his existing Saudi relationships. As an informal adviser to the Trump administration on the economy and on trade deals, he was present for Mr. Trump’s 2017 state visit to Riyadh and announced a landmark investment deal of up to $20 billion with the Saudis during it. He broke ranks with Mr. Trump after the Capitol riot. But his business relationship with the Saudis, who have long been investors in various Blackstone funds, continues.

During his Tuesday-morning panel in front of a packed ballroom, Mr. Schwarzman appeared in high spirits. He promoted a book by the money manager Ray Dalio, who was sitting next to him on the stage, joking, “I don’t even get a commission for this.”

He invoked the financial strains that the environmental movement has put on oil and gas companies, arguing that the difficulty they are having borrowing money could ultimately crimp energy supplies, leading to social and political unrest. He traded quips with his fellow panelists over whether they’d prefer to invest in gold, dollars, euros, or Bitcoin.

Another attendee, Anthony Scaramucci, the investment fund manager who served briefly as Mr. Trump’s communications director at the White House only to break with him later, said he was actively trying to raise money from Saudi investors.

“I’m raising money,” he said at the conference. “All day and all night.”

Mr. Scaramucci noted that no one should be penalized for raising capital with former government contacts once they leave politics. Despite his many public attacks in recent years on Mr. Trump, he praised both Mr. Mnuchin and Mr. Kushner, whom he called “a very smart guy.”

“To me, it’s a free market,” Mr. Scaramucci said. “I’m not like these guys throwing eggs and tomatoes at this stuff.” 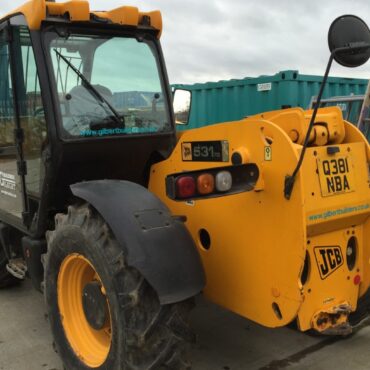 Construction equipment firm JCB has signed a deal worth billions of pounds to buy hydrogen generated by non-fossil fuel based sources. The deal for green hydrogen was signed with Australian firm Fortescue Future Industries (FFI) in a partnership the company called the first of its kind. It will mean JCB will purchase 10% of FFI’s green hydrogen production, with FFI dealing with production and logistics and JCB and a third […]