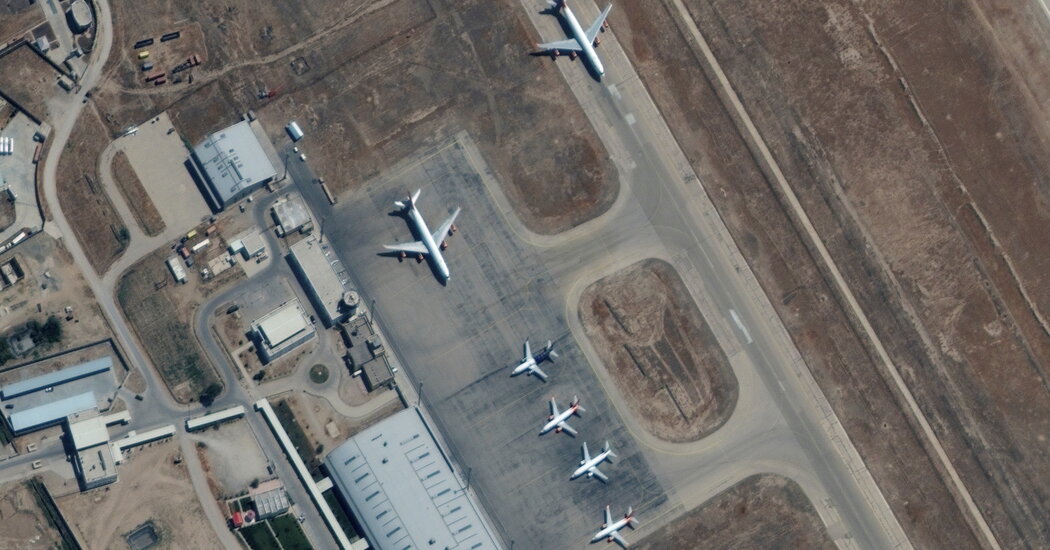 Around 1,000 people, including dozens of American citizens and Afghans holding visas to the United States or other countries, remained stuck in Afghanistan for the fifth day on Sunday as they awaited clearance for the departure from the Taliban. The holdup reflects the challenges of foreign governments working with the group, which has yet to form a government.

Negotiations to allow the planes to depart, involving officials of the Taliban, the United States and Qatar, have dragged on for days, leaving the evacuees in an increasingly precarious limbo, according to representatives of organizations trying to get them to safety.

The plight of the passengers hoping to leave the country from the airport in the northern city of Mazar-i-Sharif mirrors that of thousands of people who were unable to board planes from Kabul, the capital, after Taliban militants took the city on the eve of the U.S. troop withdrawal.

The American pullout and the end of the two-decade war in Afghanistan were overshadowed by chaotic efforts to airlift tens of thousands of Americans and their allies fleeing the Islamist fighters, who many fear will limit the rights of women and others once they officially return to power.

The Biden administration has faced criticism for leaving Americans and Afghan allies behind after the final troops left on Aug. 30.

The confusion surrounding the departure of the chartered planes from Mazar reflects the chaos in Afghanistan resulting from the departure of the United States and its Western allies and fears that the Taliban will fail to come good on their promises to respect human rights and not persecute Afghans who cooperated with the American-backed government.

“The reason the Taliban wants to prevent these people from leaving is likely because they intend to punish them for their cooperation with the U.S.,” said Mick Mulroy, a former senior Pentagon official who has been working with the group Task Force Dunkirk to help evacuate Afghans from the country. If the Taliban really are using people as a bargaining chip, Mr. Mulroy said, that “is unacceptable.”

Representative Michael McCaul, Republican of Texas and the ranking member of the House Foreign Affairs Committee, suggested during an interview on Fox News Sunday that the Taliban were preventing six airplanes from leaving Afghanistan, effectively holding Americans hostage.

“State has cleared these flights, and the Taliban will not let them leave the airport,” Mr. McCaul said, adding that he believed the problem was “turning into a hostage situation.”

Mr. McCaul said the Taliban wanted “something in exchange” for approving takeoff of the planes. He said he believed they were seeking “full recognition from the United States of America.”

But the State Department and organizers on the ground in Qatar countered Mr. McCaul’s description of the situation, saying that the planes had received necessary clearance and were awaiting final approval from the Taliban.

“The Taliban are not holding the planes hostage,” said Eric Montalvo, a former major with the U.S. Marines who is directly involved in organizing the flights.

According to documents reviewed by The New York Times, the U.S. military approved three flights to take about 1,000 evacuees, including dozens of American citizens, to Al Udeid Air Base in Qatar.

Qatar has also provided diplomatic clearance for the flights to land, but the Taliban must first allow the planes to depart Mazar-i-Sharif.

“If and when the Taliban agrees to take off, we are tracking that the landing sites will be prepared to accept the expected flights,” the State Department said in an email to congressional officials that was described to The Times. It added that the United States no longer controlled the airspace over Afghanistan.

“It is a Taliban decision to ground flights in Mazar-i-Sharif,” the email said. “We are, however, providing guidance and assistance to the extent possible — and with an emphasis on safety — to private entities working out of Mazar.”

For organizations that have been working around the clock to get U.S. citizens and at-risk Afghans out of the country, the situation has been frustrating and frightening.

Marina LeGree, the founder and executive director of Ascend, a nonprofit organization that provided athletic and climbing training to women, said 34 people from her group, which includes girls aged 16 to 23, had traveled from Kabul to Mazar-i-Sharif in hopes of boarding a plane last week.

Still, she denied that the evacuees were being held hostage, saying that they were free to leave to the airport, as some have. The situation, she said, is growing more dire by the day.

“The pressure is building. The crowd is growing. It’s just a nasty scene,” she said. “For us, we can’t go back. The girls are terrified. My girls are all Hazaras. Going back is just not an option. They’re truly desperate to leave.”

Hazaras, an ethnic minority, were targeted for abuse by the Taliban when the group previously held power before the U.S.-led invasion in 2001.

Ms. LeGree said she is calling on the U.S. government to use its connections to press the Taliban to let the contingent leave the country.

“I’m totally worried. I’ve got teenage girls in there,” she said. “Surely we have people in the U.S. government who know who to press on. We can’t fix Afghanistan, but this is one thing we can fix.”

In a statement released on Sunday, the State Department said the United States government had few resources at its disposal to force an evacuation.

“We understand the concern that many people are feeling as they try to facilitate further charter and other passage out of Afghanistan,” the department said in its statement. “However, we do not have personnel on the ground, we do not have air assets in the country, we do not control the airspace — whether over Afghanistan or elsewhere in the region.”

Even before the Taliban takeover, Afghanistan placed near the bottom of every list when it came to protections for women, and at the top in terms of the need for any efforts that would make it possible to keep them safe.

Since they swept to power last month Taliban leaders have sought to convince the world, that the harsh rule they imposed during their last stint in power, from 1996 to 2001, was a thing of the past. But there have been multiple reports of abuse of women, and on Saturday members of the Taliban beat women in Kabul who were protesting for their rights.

“As with all Taliban commitments, we are focused on deeds not words,” the State Department said in its statement, “but we remind the Taliban that the entire international community is focused on whether they live up to their commitments.” 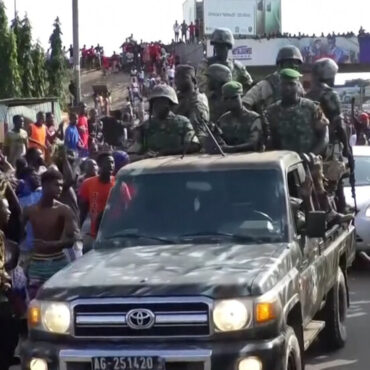 new video loaded: Crowds Celebrate in Guinea After Military Official Stages CouptranscriptBackbars0:00/0:43-0:43transcriptCrowds Celebrate in Guinea After Military Official Stages CoupResidents cheered as troops moved through Guinea’s capital, Conakry, after the head of the country’s special forces claimed to have seized power from its president. If the coup succeeds, it will be the third violent transfer of power in a West African nation in the past five months.[cheering]Recent episodes in News […]