U.S. Officials Travel to Venezuela, a Russia Ally, as the West Isolates Putin 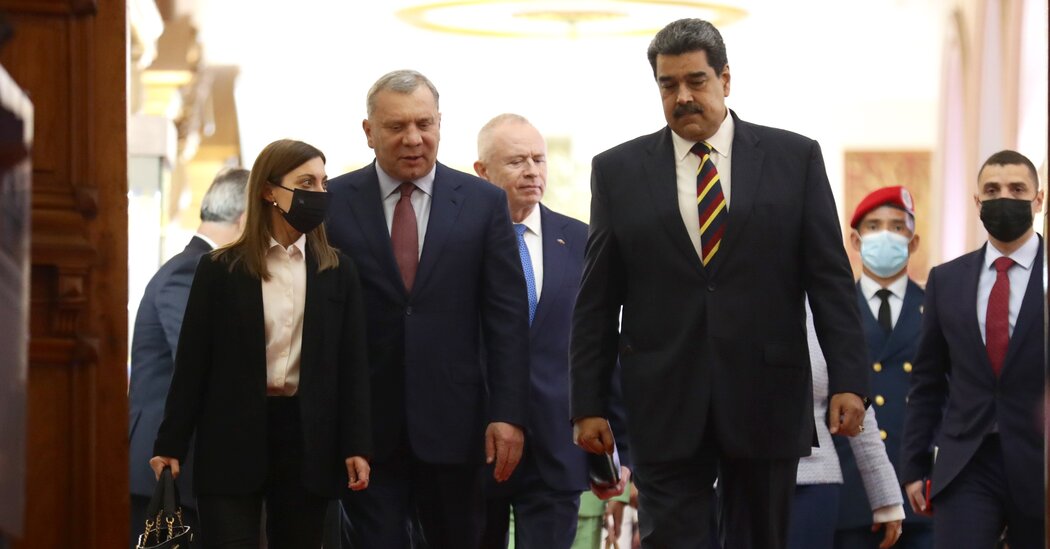 Senior U.S. officials are traveling to Venezuela on Saturday to meet with the government of President Nicolás Maduro, according to people familiar with the matter, as the Biden administration steps up efforts to separate Russia from its remaining international allies amid a widening standoff over Ukraine.

The trip is the highest-level visit by Washington officials to Caracas, Venezuela’s capital, in years. The United States broke off diplomatic relations with Mr. Maduro and closed its embassy in Caracas in 2019, after accusing the authoritarian leader of electoral fraud. The Trump administration then tried to topple Mr. Maduro’s government by sanctioning Venezuelan oil exports and the country’s senior officials, and by recognizing the opposition leader, Juan Guaidó, as Venezuela’s lawful president.

Mr. Maduro responded to the sanctions by seeking economic and diplomatic help from Russia, as well as from Iran and China. Russian energy companies and banks have been instrumental in allowing Venezuela to continue exporting oil, the country’s biggest source of foreign currency, despite the sanctions, according to U.S. officials, Venezuelan officials and businessmen.

Russia’s invasion of Ukraine has prompted the United States to pay closer attention to President Vladimir V. Putin’s allies in Latin America, which Washington believes could become security threats if the standoff with Russia deepens, according to current and former U.S. officials who spoke on the condition of anonymity to discuss sensitive policy matters.

As Russia’s economy craters, the U.S. is seizing on an opportunity to advance its agenda among Latin American autocracies that might start seeing Mr. Putin as an increasingly weak ally.

When the U.S. and its allies began considering sanctions on Russian oil and gas exports this month to punish the country for devastation wrought in Ukraine, prominent voices affiliated with both major American political parties pointed to Venezuela as a potential substitute.

Well-connected Republicans have been involved in talks about restarting the oil trade, including Scott Taylor, a former Republican congressman from Virginia who is working with Robert Stryk, a Washington lobbyist who briefly registered to represent Mr. Maduro’s regime in 2020 and remains in contact with people around it.

Mr. Taylor said he spoke on Friday night to a Venezuelan businessman who signaled that Mr. Maduro’s team was eager to re-engage with the United States.

“We should take this opportunity to achieve a diplomatic win and a wedge between Russia and Venezuela,” he said in a statement.

Trish Regan, a former Fox News host and conservative media personality, called for an alliance with Venezuela to displace Russian oil from the U.S. market.

“Venezuela has THE largest source of oil reserves yet, we’re handing that to the Chinese and Russians?” she wrote on Twitter on Friday.

Shortly before the Russian invasion of Ukraine, Yuri Borisov, Russia’s deputy prime minister, traveled to Caracas to meet with Mr. Maduro’s officials. Mr. Maduro has spoken to Mr. Putin by telephone at least twice in the past month, according to statements from both governments.

Before the U.S. imposed sanctions, Venezuela sent most of its oil to the U.S. Gulf Coast, whose refineries were built specifically to process Venezuela’s heavy grades of crude.

If the United States curtails the imports of Russian oil, Venezuela would be able to replace some of the lost supplies, said Francisco Monaldi, an expert on Venezuelan energy at Rice University in Houston.

“Here lies the oil of Venezuela, which is available for whomever wants to produce and buy it, be it an investor from Asia, Europe or the United States,” he said in a public speech on Thursday.

Mr. Maduro and other Russian allies in Latin America have begun to distance themselves from the war in Ukraine. Venezuela, Nicaragua and Cuba abstained or did not vote on the two resolutions proposed at the United Nations this week to condemn Russian aggression, and the leaders of Venezuela and Cuba have called for a diplomatic solution to the crisis.

On the Scene: Ukrainians protest in Kherson

On the Scene: Ukrainians protest in KhersonMichael Schwirtz��Reporting from UkraineRussian forces fired into the air to disperse the crowd, the mayor told me. There were no reports of casualties but the crowd was gone by the early afternoon.“I give you my word, I’m doing what I can,” he said. “But I don’t know how long I’ll be able to hang on.”Original story from https://www.nytimes.com