Ukraine Agrees to Talks With Russia, but Fighting Still Rages 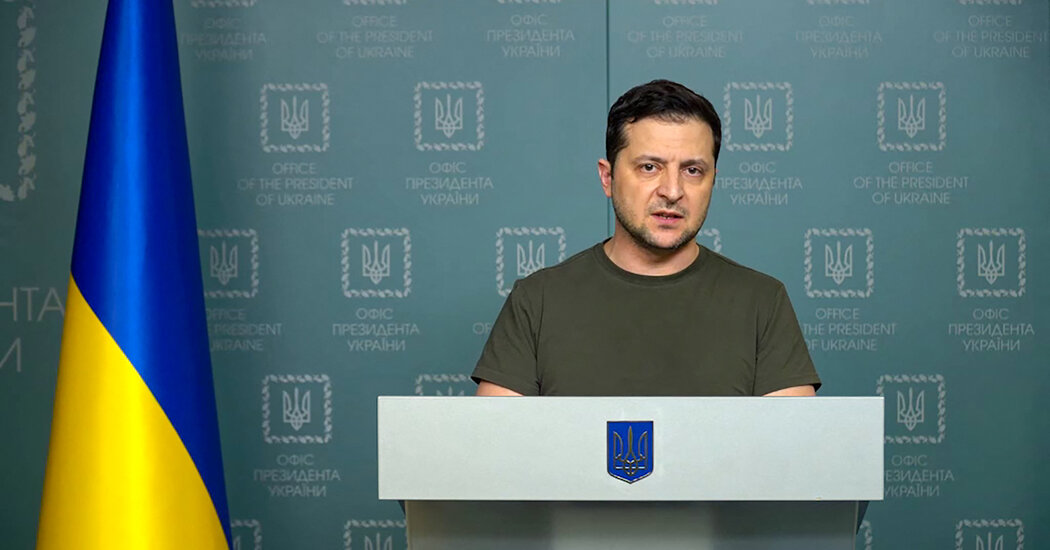 KYIV, Ukraine — President Volodymyr Zelensky of Ukraine agreed on Sunday to talks with Russia “without preconditions,” even as President Vladimir V. Putin escalated tensions by placing his nuclear forces on alert.

Mr. Zelensky said that he would send a delegation to meet with Russian officials near the border with Belarus, at a still undetermined time, but that he would remain in Kyiv, with his top officials.

“I do not really believe in the outcome of this meeting,” he said, “but let them try to make sure that no citizen of Ukraine has any doubt that I, as a president, have not tried to stop the war.”

Ukrainian officials took some obvious satisfaction in Russia’s call for talks, which came as its forces met far more resistance than expected, failing to quickly seize the capital, Kyiv.

“The enemy expected an easy walk, but got real hell,” said Prime Minister Denys Shmygal. Russia’s leaders, he said, “does not understand that it is at war not only with the armed forces of Ukraine, but with the entire Ukrainian people.”

The request for talks also came as the European Union moved to impose tough new economic sanctions on Russia, and as demonstrations in Berlin, Prague, London, Madrid and Brussels over the weekend on behalf of Ukrainians made Moscow’s isolation clear.

But international military experts cautioned that the war is young.

They noted that Ukrainian forces are spread thin, with only limited ammunition, and that thousands of better-trained Russian soldiers have not yet been thrown into the fight. The worry is that Mr. Putin may move to harsher tactics, including the shelling of cities, if his forces get bogged down.

Mr. Putin’s new nuclear threat appeared to be aimed at the West, which has increasingly rallied behind Ukraine. In brief remarks aired on state television, he told his defense minister and his top military commander to place Russia’s nuclear forces on alert, characterizing the move as a response to the West’s “aggressive” actions.

Not only are Western countries imposing “illegitimate sanctions” against Russia, Mr. Putin said, “but senior officials of leading NATO countries are allowing themselves to make aggressive statements directed at our country.”

The White House, through Jen Psaki, the press secretary, cast the nuclear alert as another example of Mr. Putin’s manufacturing threat and using it to justify confrontation.

Top Pentagon leaders remain confident about the United States’ ability to defend itself and its allies, according to a Pentagon official who briefed reporters. The official called the move to put Russia’s nuclear forces on alert unnecessary and escalatory, and said that Mr. Putin had made the possibility of a miscalculation much more dangerous.

Slowed by Ukrainian resistance and their own logistical shortcomings, Russian forces have already begun adopting harsher methods such as rocket attacks in the city of Chernihiv, to the northeast of Kyiv, the Pentagon official said. Those tactics could produce many more civilian casualties.

Russian troops, he said, are adopting a siege mentality, which increases the likelihood of their taking civilian life and damaging infrastructure.

In Ukraine’s south, the official said, Russian troops are advancing, moving up from Crimea and also mounting an amphibious assault near Mariupol, where they are within 50 kilometers of the city. Mariupol, a major port, is viewed as part of any Russian land bridge from Donetsk and Luhansk — the eastern Ukrainian regions Moscow just recognized as independent states — to Crimea, which Moscow annexed in 2014.

Russian forces were also on the move from the north, where they were making a drive toward Kyiv.

In the center of Ukraine, Russia appears to be trying to cut off the main Ukrainian military forces, which have been defending the former line of contact with the Donetsk and Luhansk enclaves, to prevent them from moving toward the capital and getting supplies sent by Western allies overland through Poland.

Russian troops, at least for a time, also drew closer to the center of Kharkiv, Ukraine’s second-largest city, according to videos and photographs analyzed by The New York Times. The footage showed Ukrainians firing rockets toward Russian troops, as well as some Russian military vehicles burning and others being ransacked by Ukrainian forces.

With each passing day of war, Mr. Zelensky, a former comic, has embraced his new role: as a symbol of bravery and patriotism who has united his citizens against an invader.

Once derided because of his entertainment past as the unlikeliest of presidents, Mr. Zelensky has transformed into the leader Ukraine did not know it needed. Dressed in an army-green T-shirt or fleece, unshaven and wan, he has inspired Ukrainians to defend their streets with the most rudimentary of weapons. He has also won over much of Europe, which has been moved to aid a country it sees as fighting bravely for independence, freedom and democracy.

And Mr. Zelensky’s response to a reported American offer to evacuate him — “I need ammunition, not a ride” — will most likely go down in Ukrainian history, whatever the outcome of the battle.

The Ukrainian president and his team have made deft use of social media. His impassioned speeches from the streets of Kyiv have gone viral. And they have also posted photos and short videos of Ukrainians filling Molotov cocktails, volunteering to fight, being issued automatic weapons and vowing to defend their country.

Mr. Zelensky has also inspired European leaders to do more to help his country. His leadership and the resilience of the Ukrainian people “are an inspiration to us all,” said Ursula von der Leyen, president of the European Commission.

Appearing onscreen during than an emergency summit meeting of European Union leaders several days ago, he gave a passionate 10-minute speech that moved some reluctant leaders to endorse a harsher package of economic sanctions on Russia, said a senior European official who was in the room.

“This may be the last time you see me alive,” Mr. Zelensky told them.

The silence in the room after Mr. Zelensky spoke was impressive, the official said, and it was his impression the speech made a major difference in convincing more reluctant countries, like Germany, Italy and Hungary, to agree to tougher financial and banking sanctions and to deliver defensive weapons to Ukraine.

The new government of Germany also made what some consider a historic shift toward taking more responsibility for European security. Hampered by its own totalitarian history, Germany has been a reluctant hard-power player since the collapse of the Soviet Union. But on Sunday, in a strong speech before the German Parliament, Chancellor Olaf Scholz turned the page.

Germany will send defensive weapons to Ukraine; support tougher economic sanctions, including the exclusion of major Russian banks from the SWIFT payments system; and raise military spending to more than 2 percent of its gross domestic product for the foreseeable future — long a NATO goal that Germany had resisted. Mr. Scholz also proposed a 100 billion euro fund to strengthen the German army.

Mr. Scholz, a member of the Social Democratic Party, which has been known for its closeness to Moscow, also said that Germany would agree to replace its aging Tornado fighters with newer planes capable of dropping nuclear bombs. He already had broken with previous German policy by agreeing to put on hold the Nord Stream 2 natural gas pipeline, which goes from Russia to Germany, bypassing Ukraine.

Mr. Scholz, German officials say, believes that Mr. Putin lied to him personally in their direct talks in Moscow about the Ukraine crisis and that the Russian invasion created serious new threats to German and European security that cannot be ignored.

Claudia Major, a defense expert with the German Institute for International and Security Affairs, called the changes “a revolution in German defense policy,’’ while Jana Puglierin, director of the Berlin office of the European Council on Foreign Relations, said: “It is hard to overestimate the significance of this. I would not have thought it possible.”

In an emergency virtual meeting of European Union foreign ministers on Sunday, the bloc agreed to further tough economic sanctions on Russia and to ban Russian aircraft from E.U. bloc’s airspace. They also agreed for the first time to use E.U. funding to reimburse member countries for the purchase and shipment of military equipment to a country under attack.

Weapons and equipment of all kinds are being sent overland through Poland into western Ukraine, which is still out of Russia’s reach. Some experts think Russian efforts to disrupt such convoys will increase once the shipments are inside Ukraine.

Ms. von der Leyen also said that the European Union would move to ban the state-owned news outlets Russia Today and Sputnik, so they “will no longer be able to spread their lies to justify Putin’s war and to sow division.”

Europe will continue to welcome refugees, she said. As many as seven million Ukrainians are internally displaced by the conflict, European officials said.

In Kyiv, Nataly Kasianenko, 31, has been sheltering for days with her husband and a dachshund in a parking garage in the northern Obolon neighborhood, six miles from the city center, which was the scene of intense fighting on Friday and Saturday. “I actually lost track of days and nights and nights,’’ she said. “We even forgot to eat because of this tension.”

Despite the fear, she said, they are staying.

“It’s in our blood, it’s Ukrainian blood,” she said. “We can’t just leave, we cannot just surrender — we will always stay on our land.” 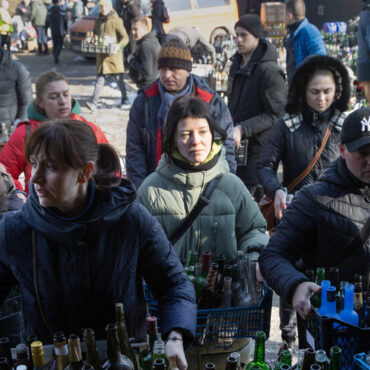 ‘I’m a Soldier Now.’ Even in Untouched Villages, Ukrainians Prepare to Fight

DNIPRO, Ukraine — Outside the large military hospital in the central Ukrainian city of Dnipro, people lined up on Sunday to donate warm clothes and water, while a priest moved among the crowd offering sips of holy wine from a silver chalice. He allowed those waiting to kiss the large silver cross he wore on a chain around his neck.Since the war began three days ago, wounded soldiers have been […]