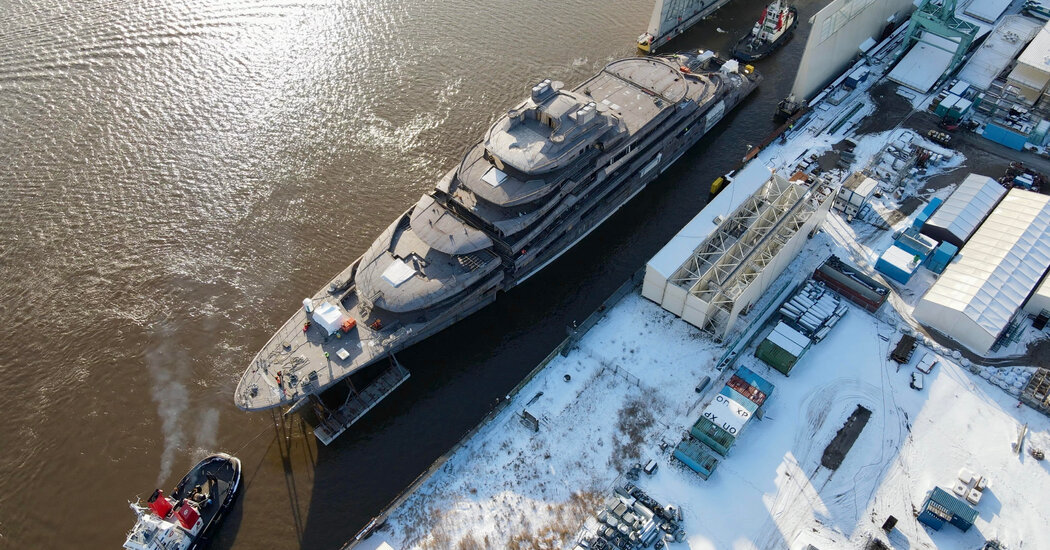 As his steel mill in Mariupol was being destroyed by Russian bombs, becoming the site of a last stand by the city’s defenders, the billionaire Rinat Akhmetov, Ukraine’s richest man, emerged as a staunch supporter of the country’s war effort.

But even as Mr. Akhmetov pledged to help rebuild Ukraine, a large portion of his fortune was committed to a secret vanity project that speaks to his past as a pro-Russian oligarch: A German shipyard is building a superyacht for his family’s use.

The yacht, now known only by the code name Luminance, may be among the 10 largest superyachts in the world when finished. Nearly half of those are owned by Russian business magnates. In tonnage, the 475-foot luxury vessel could approach the size of the Moskva, the Russian Navy cruiser that the Ukrainian military said it sank last month in the Black Sea.

Now, Mr. Akhmetov is considering selling the yacht, even before it is completed. “Given the current circumstances, we are considering its possible sale,” Jock Mendoza-Wilson, director of international relations for Mr. Akhmetov’s company, System Capital Management, said in a statement. The New York Times is the first to reveal Mr. Akhmetov’s ownership of the vessel.

Owning a luxury yacht has become a status symbol for oligarchs from Russia and other former republics of the Soviet Union, who in recent years have eclipsed Gulf state kings, princes, sultans and sheikhs as the top buyers of the very biggest vessels.

But since Russia’s 2014 annexation of Crimea and its support of a separatist movement in eastern Ukraine, Mr. Akhmetov has distanced himself from his pro-Russian past, which included financial backing for the Kremlin-supported and corrupt former president Viktor Yanukovych. Mr. Akhmetov’s purchase of the Luminance is a throwback to that world.

Luminance is being built by Lürssen, the German company that also built the Scheherazade, the superyacht that United States officials say is linked to Vladimir V. Putin, Russia’s president. Italian authorities announced earlier this month that they had impounded that yacht. The two vessels also share the same construction manager, Imperial Yachts, a Monaco-based company that counts many Russian oligarchs as customers.

But Luminance is about 15 feet longer than the $700 million Scheherazade. That kind of money is almost enough for Ukraine to buy two new German-built attack submarines and is about the cost of a top-of-the-line Baden-Württemberg-class naval frigate, a warship armed with guns and missiles that Lürssen also helps to build. A spokesman for Lürssen did not comment.

U.S. aid. The Senate overwhelmingly approved a $40 billion aid package for Ukraine, bringing the total American investment in the war to $54 billion in just over two months. The measure is the latest proof of the bipartisan support on Capitol Hill for helping Ukraine fight Russia.

In Mariupol. Hundreds more Ukrainian fighters that had been in a steel plant in Mariupol surrendered to Russia. Ukrainian officials have said the fighters will be exchanged for Russian prisoners of war, but they have provided no details about the agreement.

Mr. Mendoza-Wilson said that Mr. Akhmetov had signed the contract to build the yacht in 2018. But the work continued well after the Russian invasion began this February, according to a person who has worked at one of the many companies with contracts to help build the vessel. The employee, who asked for anonymity because he did not want to subject his colleagues to reprisals, said some of Mr. Akhmetov’s relatives had been making trips in Western Europe to go over construction details. Mr. Akhmetov has been in Ukraine during the war.

It is unclear how Mr. Akhmetov could sell a vessel that is still under construction or back out of the contract that he signed. But a person who is working on the Luminance project, speaking anonymously because he signed a nondisclosure agreement, said the best time for him to sell might be when the ship is finished and ready to be delivered, because a potential buyer could take possession of a new yacht without the hassles involved in negotiating contracts and years of waiting while the vessel is being built. One industry estimate said the ship would be done next year.

“The best time to sell a boat is the day before it launches,” the person said.

This article contains images of graphic violence.BUCHA, Ukraine — It is the last time the men would be seen alive: In two videos, Russian paratroopers march them at gunpoint along a street in Bucha, a suburb of Kyiv. Some of the Ukrainian captives are hunched over, holding the belts of those in front of them. Others have their hands over their heads. “Walk to the right, bitch,” one of the […]