Ukrainian Protesters Take to the Streets in Occupied Kherson 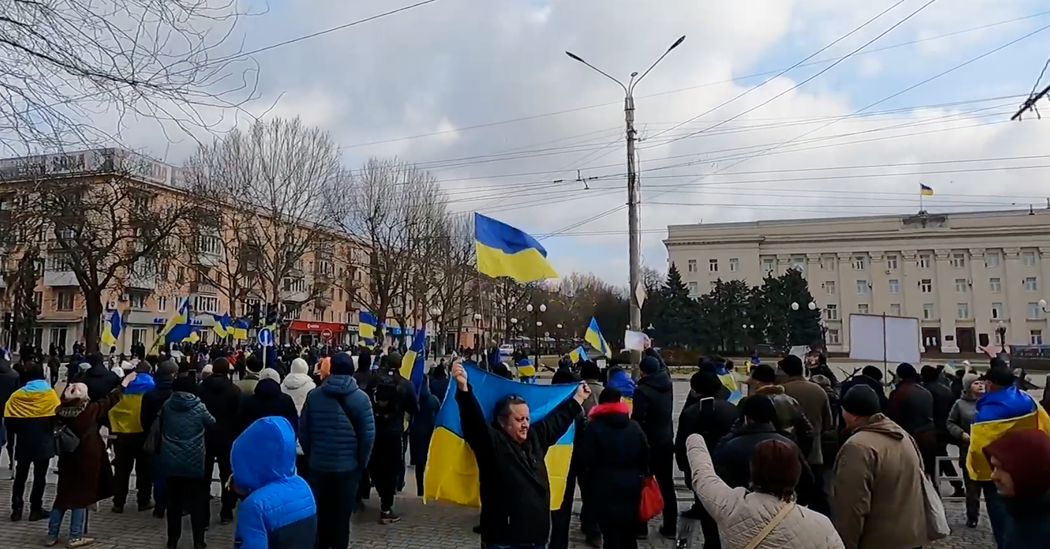 ODESSA, Ukraine — Kherson, in southern Ukraine, was the first major city to fall to Russian forces and now popular street protests are presenting a challenge to the new authority there.

At around 10 a.m. on Saturday, people started gathering in Liberty Square, the central square in the city center, according to video streamed live by protesters at the scene. There appeared to be hundreds of people, chanting and holding Ukrainian flags.

One video verified by The New York Times showed a man on top of a Russian armored personnel carrier, waving a Ukrainian flag as it drove down the street, prompting cheers from onlookers.

The mayor of Kherson, Igor Kolykhaev, said that at one point Russian forces fired into the air to disperse the crowd though protesters initially remained rooted to the spot. There were no reports of casualties, the mayor said. The mayor estimated that about 2,000 people attended.

The protest was the most visible example yet of resistance to Russian occupation, and a direct challenge to the Russian forces that Kremlin officials claim were sent to liberate Ukrainian cities.

There were reports of protests in other cities and towns under Russian control, including in Berdyansk and Melitopol, where a video showed residents walking down the street holding Ukrainian flags and singing the national anthem.

The protests underscore the challenges facing Russian forces as they move to capture and hold Ukrainian territory. Russia’s president, Vladimir V. Putin, insists that Ukrainians and Russians are “one people,” and has described resistance to Russia’s incursion as the product of brainwashing by nefarious western operators. But if there was sympathy for Russia before last month’s invasion, it has no doubt eroded steadily as Russian forces increasingly target civilians in large urban areas.

Russian troops captured Kherson last week after a vicious battle with Ukrainian forces that Mr. Kolykhaev said had left more than 300 dead, including dozens of civilians.

Mr. Kolykhaev said in an interview that he had dispatched volunteers to collect bodies strewn about the city. Many of those were unidentifiable, he said, forcing the city to burry them in mass graves.

After Russian forces secured control of the city, Mr. Kolykhaev said he was visited by the Russian commander, who informed him that they were setting up a military administration to govern the city.

After wrecking city services and destroying supply lines for medicines and other essential goods, the Russian forces, whom Mr. Kolykhaev referred to sarcastically as “the kind liberators,” were trying to present themselves as saviors.

“First they create a critical situation, then heroically they save us so as to show on camera how everyone thanks the ‘benefactors,’” Mr. Kolykhaev said in a text message. “I give you my word, I’m doing what I can, but I don’t know how long I’ll be able to hang on.” 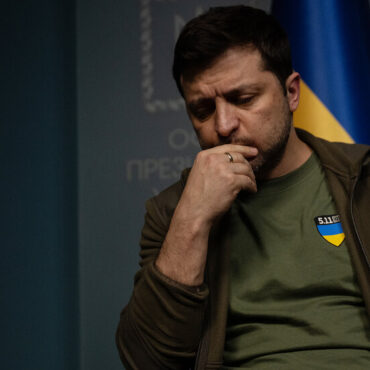 Allies Focus on Security of Zelensky and Other Ukraine Leaders

WASHINGTON — Allied governments have been discussing how to secure the line of succession in Ukraine in the event President Volodymyr Zelensky is captured or killed by Russian forces, according to officials from multiple governments.The concerns are primarily about making sure there is still an independent Ukrainian government in some form, even if Russia finds a way to install a puppet leadership in Kyiv, the capital. Having an independent leader […]