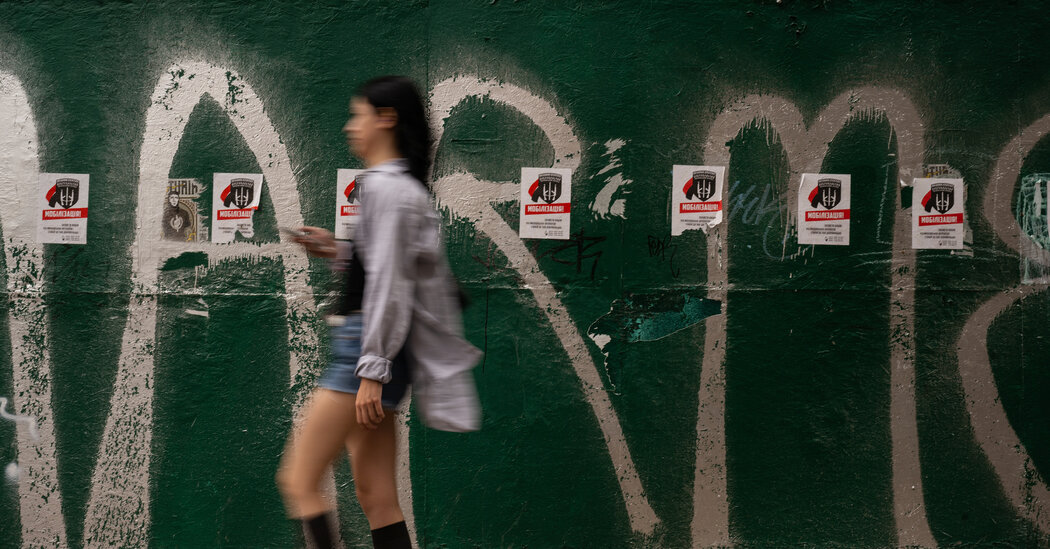 KYIV, Ukraine — The Ukrainian military extended the fight deeper into Russian-controlled territory on Friday, as it sharpens a strategy of trying to degrade Moscow’s combat capabilities by striking ammunition depots and supply lines in the occupied Crimean Peninsula and other areas the Kremlin had long thought to be safe.

Crimea, a key staging ground for Russia’s invasion, has been firmly under Kremlin control since it was illegally annexed by Moscow in 2014. But it has been rocked by several recent attacks, some carried out by clandestine Ukrainian fighters operating behind enemy lines. Oleksiy Danilov, the head of Ukraine’s national security council, said on Friday that Kyiv would target sites in Crimea as part of a “step-by-step demilitarization of the peninsula with its subsequent de-occupation.”

Overnight into Friday, blasts hit at a military airfield outside Sevastopol, the largest city in Crimea and home to Russia’s Black Sea Fleet; the Russians later said the booms were the sound of successful antiaircraft fire. Loud bangs were also reported above the Kerch Strait bridge, the only land link connecting Russia to Crimea. There appeared to be no damage to the bridge, and Russia said that those explosions, too, were the result of antiaircraft fire.

A large fire also broke out in an ammunition depot in Russia itself, in the border region of Belgorod, forcing the evacuation of two villages, according to the region’s governor, Vyacheslav Gladkov.

Russian officials acknowledged explosions at the sites and said they were investigating the causes.

It remains unclear whether Ukraine’s recent activity in Russian-held territory is just an isolated flurry or, as Ukrainian officials have said, the first stages of a sustained effort to diminish Russia’s military capability.

Nor is it clear that even a successful campaign of sabotage could overcome the Russian military’s overwhelming advantage in numbers and weaponry. Russia suffered a humiliating defeat in northern Ukraine in the war’s early days, but was able to regroup and launch a drive in the east that rumbled through Luhansk Province and is still inching forward.

Paula J. Dobriansky, a former American diplomat specializing in national security affairs, said that by threatening Russian supply lines and underscoring Moscow’s tenuous grip on Crimea, the strikes in Crimea were “both operational and symbolic.”

The strikes may also represent a deliberate strategy not only to disrupt Russian logistics and supply lines but to put the war back on the Russian domestic political agenda, said Christopher Miller, an associate professor of international history at the Fletcher School at Tufts University.

Our Coverage of the Russia-Ukraine War

“The Russian view has been that Crimea is a closed issue, and while the reality is that Russia has had uncontested de facto control, now that is no longer the case,” he said. “Certainly, Ukraine isn’t threatening any immediate retaking of Crimea,” he added, but Ukraine has shown the area is vulnerable to attack.

The blasts came amid escalating tensions around the sprawling Zaporizhzhia nuclear plant in southeastern Ukraine, Europe’s largest, where Russia and Ukraine have accused each other of planning an attack that could lead to a nuclear disaster.

President Vladimir V. Putin of Russia, in his first public remarks about the battles that have raged around the nuclear complex, accused the Ukrainian military on Friday of risking a “large-scale catastrophe” by shelling the plant.

The remarks, paraphrased by the Kremlin presidential website, came during a telephone call initiated by President Emmanuel Macron of France.

The two presidents agreed to work toward organizing a visit by a delegation from the International Atomic Energy Agency, the United Nations’ nuclear watchdog, the Kremlin said. Ukraine has said, too, that it would welcome an I.A.E.A. delegation. The I.A.E.A. said on Friday that it was “in active consultations with all parties” to send inspectors “as soon as possible.” But it remains unclear how a visit would be organized amid the heavy fighting in the region.

Ukraine on Friday raised fresh concerns about another safety issue at the Zaporizhzhia plant, warning that Russia was preparing to disconnect the plant’s power lines from Ukraine’s grid. The potentially risky and complicated process could deprive government-controlled territories of power and divert it to Crimea and Russia.

The Russians would have to shut off reactors at the plant to reroute the electricity. That means that power to keep cooling systems functioning at the plant would come from diesel generators, raising the risks of an accident at a facility where workers have been operating under duress.

During a visit to the Ukrainian city of Odesa on Friday, António Guterres, the United Nations secretary general, said that a recent agreement that allowed shipments of grain to flow from the Black Sea port stood as a symbol of what the world can achieve when countries work together for the common good.

“Obviously, the electricity from Zaporizhzhia is Ukrainian electricity, and it’s necessary, especially during the winter for the Ukrainian people, and this principle must be fully respected,” he said. Mr. Guterres has called for a demilitarized zone around the plant — an idea Russia has rejected.

Ukrainian claims about Russia’s intentions could not be independently verified, and Moscow had no immediate comment.

As the war nears the six-month mark, the Pentagon on Friday announced a new shipment of up to $775 million in arms and equipment to help Ukraine mount a counteroffensive against Russian troops in the south.

“The mine-clearing is a really good example of how the Ukrainians will need this sort of capability to be able to push their forces forward and retake territory,” a senior Defense Department official told reporters.

The package also includes 16 105-millimeter howitzers and 36,000 rounds of ammunition, as well as 15 ScanEagle drones to help spot Russian targets. The Defense Department will also continue to send rockets for the HIMARS launchers that have been credited with destroying Russian command posts and ammunition depots.

For now, the United States has limited to 16 the number of HIMARS launchers sent to Ukraine, fearing that providing more could deplete the Pentagon’s stockpile of satellite-guided rockets and eventually endanger U.S. combat readiness.

A senior Pentagon official, speaking on condition of anonymity to discuss operational matters, declined to comment on the attacks and other explosions in Crimea over the past two weeks. But the official seemed to confirm the effectiveness of Ukraine’s recent efforts to hobble the Russian military effort.

“Right now, I would say that you are seeing a complete and total lack of progress by the Russians on the battlefield,” the official said. “You’re seeing this hollowing out of the Russian forces in Ukraine.”

Pressed by reporters, the official acknowledged that the Ukrainians have not made much progress either, lacking sufficient troops and combat power to drive the Russians from their defensive positions.

“We haven’t seen a significant retake of territory,” the official said, “but we do see a significant weakening of Russian positions in a variety of locations.”

Marc Santora reported from Kyiv, Ukraine, Eric Schmitt from Washington and Michael Levenson from New York. Reporting was contributed by Neil MacFarquhar from Istanbul and John Ismay from Washington.

Dr. Sadik harnessed that insight while leading the Population Fund, working with other top U.N. officials, many of them women, to bolster women’s rights with the idea that population growth would ebb as they gained more control over their lives.She also approached the population issue from the perspective of its impact on the natural environment. She wrote in a 1987 Times opinion essay that some people believed that population growth […]