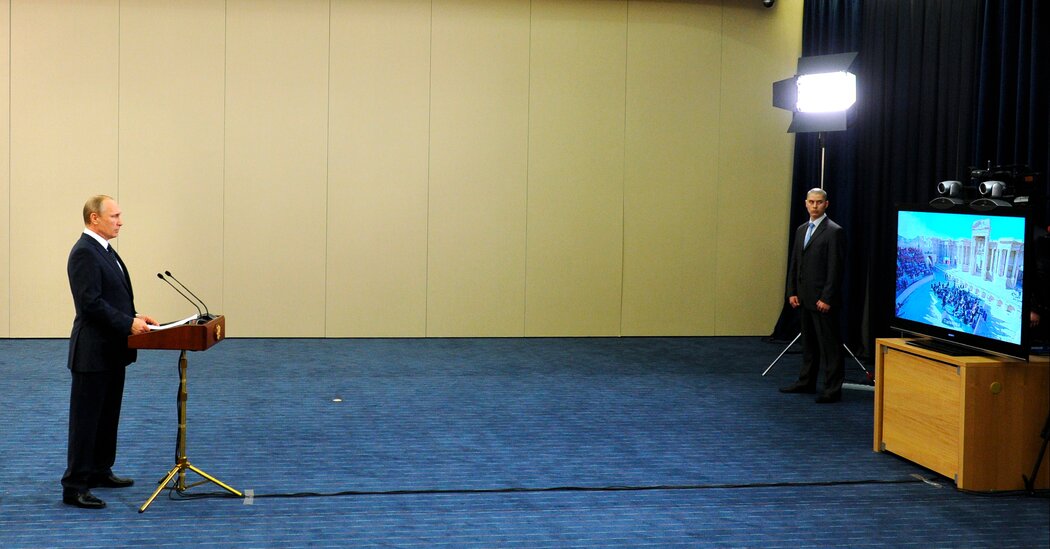 A conductor, perceived to be aligned with the opposition in wartime, pushed from his podium in disgrace.

Another, two decades later, offered a prestigious position, only to withdraw under pressure after protests of his ties to a despised foreign regime.

The first, Karl Muck, a German-Swiss maestro, led the Boston Symphony Orchestra until he was arrested and interned, in what is now widely viewed as a shameful example of anti-German hysteria at the start of World War I.

The profound musical legacy of the second — Wilhelm Furtwängler, who never joined the Nazi Party but was essentially its court conductor, dooming his appointment to the New York Philharmonic — still struggles to emerge from his association with Hitler.

How will we think of Valery Gergiev a century from now?

One of the world’s leading conductors, he has in just the last week lost a series of engagements and positions, including as chief conductor of the Munich Philharmonic, for not disavowing the war in Ukraine being waged by his longtime friend and ally, President Vladimir V. Putin of Russia.

The swift unraveling of his international career — and the decision of Anna Netrebko, a Russian diva who is one of the biggest stars in opera, to withdraw from performances amid renewed attention to her own ties to Mr. Putin — raise a host of difficult questions.

What is the point at which cultural exchange — always a blur between being a humanizing balm and a tool of propaganda, a co-opting of music’s supposed neutrality — becomes unbearable? What is sufficient distance from authoritarian leadership?

And what is sufficient disavowal, particularly in a context when speaking up could threaten the safety of artists or their families?

Mr. Gergiev, with his quasi-governmental role as general and artistic director of the Mariinsky Theater in St. Petersburg, is closer to Furtwängler than to Muck. He has endorsed Mr. Putin in the past and promoted his policies with concerts in Russia and abroad. But when he has spoken — he has remained silent through this latest firestorm — he has tended to sound like Furtwängler, who longed to focus only on scores and said, “My job is music.”

“Am not politician, but exponent of German music, which belongs to all humanity regardless of politics,” Furtwängler wrote in 1936, in clipped telegram style, withdrawing under pressure from the New York Philharmonic post.

Classical music likes to think of itself this way: floating serenely above politics, in a realm of beauty and unity. Its repertory — so much of it composed in the distant past — seems insulated from present-day conflicts. What can Beethoven’s Ninth Symphony do except good?

But politics and music — a field in which Russian performers have long been stars — have swiftly collided since the invasion of Ukraine. The Mariinsky Orchestra’s tours have been canceled. On Sunday, the Metropolitan Opera announced that it would no longer engage with performers or other organizations that have voiced support for Mr. Putin. Presenters in the United States, Germany, France, Switzerland and the Netherlands have announced the cancellations of performances by some artists who support Mr. Putin.

Ms. Netrebko had engagements at the Bavarian State Opera canceled, and then announced that she planned to “step back from performing for the time being,” withdrawing from her upcoming dates at the Zurich Opera.

The artistic director in Zurich, Andreas Homoki, noted some of the complexities, welcoming a statement that Ms. Netrebko made opposing the war but suggesting that her failure to condemn Mr. Putin put her at odds with the opera house’s position. But Mr. Homoki took pains to note that his company did not “consider it appropriate to judge the decisions and actions of citizens of repressive regimes based on the perspective of those living in a Western European democracy.”

In her first public statement on the war, in an Instagram post Saturday morning, Ms. Netrebko — who has long been criticized for her ties to Mr. Putin, and was photographed in 2014 holding a flag used by Russian-backed separatists in Ukraine — initially seemed to be issuing the kind of statement that had been lacking from Mr. Gergiev.

“I am Russian and I love my country,” Ms. Netrebko went on, “but I have many friends in Ukraine and the pain and suffering right now breaks my heart. I want this war to end and for people to be able to live in peace.”

Though she conspicuously didn’t mention Mr. Putin, Ms. Netrebko’s words were simple and tender, a needle — love of her country and empathy for another — seemingly threaded.

But unfortunately for those of us who have cherished her as a performer, there was more. In the next slide, she added that “forcing artists, or any public figure, to voice their political opinions in public and to denounce their homeland is not right.”

“I am not a political person,” she wrote, echoing the Furtwängler perspective. “I am not an expert in politics. I am an artist and my purpose is to unite people across political divides.”

She then added to her Instagram story, alongside heart and praying-hands emojis, a text that used an expletive in reference to her Western critics, and said they were “as evil as blind aggressors.”

So much for threading the needle. And a series of posts over the following days, which were later deleted, only muddied the waters further.

What could have smoothed over criticism instead inflamed it. The politically outspoken pianist Igor Levit, who was born in Russia, did not mention Ms. Netrebko by name in his own Instagram post on Sunday morning, but wrote, “Being a musician does not free you from being a citizen, from taking responsibility, from being a grown-up.”

“PS,” he added: “And never, never bring up music and your being a musician as an excuse. Do not insult art.”

The Met, where Ms. Netrebko is scheduled to star in Puccini’s “Turandot” this spring, seemed to have her in mind — along with a producing partnership with the Bolshoi Theater in Moscow — when it made its announcement on Sunday.

“While we believe strongly in the warm friendship and cultural exchange that has long existed between the artists and artistic institutions of Russia and the United States,” the company’s general manager, Peter Gelb, said in a video statement, “we can no longer engage with artists or institutions that support Putin or are supported by him.”

It’s true: Ms. Netrebko is not a politician, expert or otherwise. In this she is unlike Mr. Gergiev, who has repeatedly and explicitly worked as a government propagandist, leading battlefield concerts in South Ossetia, a breakaway region of Georgia, in 2008, and in Palmyra after that Syrian site was retaken by Syrian and Russian forces in 2016. In Ossetia, he even led Shostakovich’s “Leningrad” Symphony, completed during the German siege of that city in World War II and as charged a musical memorial as there is to Russian suffering.

But Ms. Netrebko is certainly a political actor — the kind of “political person” she denies being. Again and again in the past, she has voiced her political opinions, publicly if vaguely. (She said that she had been caught off-guard when she was handed the separatist flag in that 2014 photograph with a separatist leader, which was taken after she gave him a donation for a theater in a region controlled by separatists; that donation, she claimed at the time, was “not about politics.”)

Ms. Netrebko can hold whichever flag she wants, of course. But she should not be surprised that there are consequences. In January 2015, after her Met performance of Tchaikovsky’s “Iolanta” under Mr. Gergiev’s baton, a protester climbed onto the stage during her curtain call and unfurled a banner that called them “active contributors to Putin’s war against Ukraine.”

The Met, which opened a performance this week with the Ukrainian national anthem, has left vague the way it intends to police its new test. But I hope the company will look at the existing record rather than requiring new, public words from artists who may have legitimate reasons of safety to remain silent about Mr. Putin and his actions. Eliciting — coercing, some might say — affirmative statements hardly seems the right way to oppose authoritarianism.

A critical city. Russia’s push to seize key Ukrainian cities accelerated on the seventh day of the invasion, with Russia claiming that its forces were in control of Kherson, though Ukraine disputed the claim. More explosions struck Kyiv, and the siege of the city of Kharkiv continued.

But Ms. Netrebko’s caustic irritation at the notion that any statement might be expected from her makes it difficult to feel sympathy with the position she’s in, or with any of those legitimate reasons she might have to hedge her criticism of the Russian government. She could have stated she opposed the war, and left it at that, but instead she effectively negated those words of peace by making it all about her.

No one has asked her to denounce her country — just its aggression, which has been bravely resisted by many within and without Russia. (Whether or not to perform in the country has quickly become a fraught issue for many artists, Russian and not.)

Even as the strongman nature of Mr. Putin’s rule and his extraterritorial designs became ever clearer over the past two decades, the Met continued to engage Mr. Gergiev and Ms. Netrebko, and doubtless other artists who supported and still support the Russian leader. There are some who believe that the Met and other cultural institutions should have taken these new steps years ago.

I understand the reluctance to step away from idyllic notions of exchange and collaboration, even amid conflict. And I don’t share the mood of gleeful triumph with which many on social media are reacting to these cultural cancellations. But faced with a leader who now seems fully intent on destabilizing the global order, engaging an artist unapologetically aligned with him could fairly be seen as a step too far.

Sanctions are designed to burden a country’s elite, to drive a wedge between that elite and the leadership. Those sanctions can be economic, of course, but they can also be cultural. The Met — along with the Munich Philharmonic and the rest — is now imposing them. Hopefully they work. Hopefully they’re not too late.

They have certainly come fast, even in an era that revels in lightning-quick deplatformings. Mr. Gergiev’s international career, built over decades, seems to have unraveled in just a few days.

He can’t look to Furtwängler’s example for solace: Several years after World War II, the Chicago Symphony Orchestra was also forced under pressure to withdraw a position it offered him.

“Now he wants to earn American dollars and American prestige,” the eminent pianist Arthur Rubinstein said at the time. “He does not merit either.” 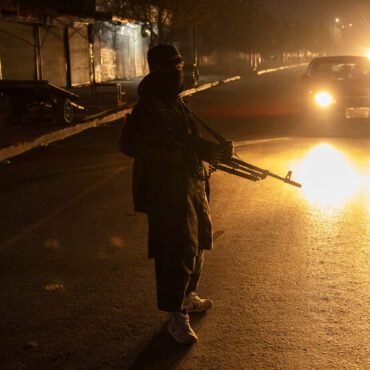 Mullah Fazel Mazloom, the acting deputy defense minister and former Guantánamo detainee, is leading the search operation.Credit...Department of DefenseReaction to the search operation in Kabul has broken largely along ethnic lines. Some residents — mostly Pashtuns — are thankful that the Taliban are taking a hard stance against criminality, a policy the Taliban has long been known for.But members of ethnic minorities have accused the Taliban of targeting them for […]