‘We found ourselves more than lost’: The inside story of ‘No Time To Die’

Mr. Bond, we’ve been expecting you. No film in the 007 franchise has had quite the wait, nor lived under the weight of expectation, like “No Time To Die.” A change of director, nearly half a dozen release dates, a studio sale and a global pandemic couldn’t defeat the British spy, but he’s never been challenged like this before. Six tumultuous years after the last movie, the final chapter of the Daniel Craig era has arrived.

At times it felt like we might not have had this film at all. Craig, in a quote that went far and wide on the tour for “Spectre” in 2015, said he’d rather “slash my wrists” than do another Bond, and his return wasn’t confirmed until 2017. By March 2018, British director Danny Boyle was working on a screenplay, then in the summer things began to unravel as “creative differences” emerged.

“One day Danny left, and for God knows all sorts of very good reasons,” recalled Veronique Melery, the film’s set decorator. “We found ourselves a bit, I mean, more than lost, waiting for a new director to come in.”

A month after Boyle’s departure in August, Cary Joji Fukunaga of “True Detective” and “Beasts of No Nation” fame was announced as his replacement. He wrote a new story alongside series stalwarts Neal Purvis and Robert Wade, and the shoot began in early 2019. “It was a completely new job,” Melery said. “What we did before Cary entered was not relevant anymore.”

Daniel Craig as James Bond in “No Time to Die.” Credit: MGM/Universal

Series gatekeepers, producers Barbara Broccoli and Michael G. Wilson, say each script begins with two questions: 1. What is the world going to be afraid of in two or three years when the film comes out? And 2. What are the emotional and personal challenges Bond will face?

“The combination of those two things means that we do something fresh each time,” said Broccoli. “Of course, now it turned out to be four years hence because of Covid,” added Wilson. “You have to get out your crystal ball and take a stab at it. In this particular case, I think we came pretty close to what the world is concerned about.”

Yes, there is a large irony at the heart of “No Time To Die” that audiences will have to discover for themselves. Without divulging too much, after the prologue we meet up with Bond five years after leaving MI6. But his retirement in a Jamaican idyll is short-lived when an old friend enlists his help after a scientist goes missing.

As the last installment in the Craig era’s serialized approach to storytelling, there’s added pressure to stick its landing. It’s also a film advertized as the actor’s final appearance. Bond may be an immortal character, but “No Time To Die” represents an ending.

Fukunaga notes that stories with long dramatic arcs often conclude disappointingly and was determined to avoid this fate. To do so he returned to the beginning.

“I used ‘Casino (Royale)’ as his first film as an inspiration of sorts — that’s where all these larger arcs are jumping from,” he told CNN. “How do we conclude those? Which characters do we bring back? What are the scenarios that were presented over the course of the films that shaped and changed him? And how can these themes be brought back in and see where that leaves us now as a sort of final goodbye?”

There was also the question of tone. This is the first Bond post-#MeToo — an asteroid if ever there was one for the spy M once called a “sexist, misogynistic dinosaur.” The director said that “the more outdated parts of the character were probably weeded out before I came along.” Nevertheless, Phoebe Waller-Bridge (“Fleabag,” “Killing Eve”) was brought in to work on the script, and according to Broccoli, inject some British humor.

While “No Time To Die” follows the age-old structure of three supporting female characters, it’s also keen to set fire to the “rules” circumscribing them. Lashana Lynch’s Nomi has taken over the 007 moniker in Bond’s retirement, Ana de Armas steals the show in her all too brief appearance as newly-minted CIA agent Paloma, and Lea Seydoux returns as Madeleine Swann in an arc not seen in the films before.

“I think this movie is ‘Bond women,’ not so much ‘Bond girls,'” argued de Armas. “They’re highly skilled, they’re powerful (and) they all show it in their own way. They’re equals to Bond … Times change, and I think that is reflected in the film.”

But for every progressive element, this is a series grounded in tradition. Location manager Charlie Hayes came on board during what he diplomatically calls the “period of restart.” “The script was still in flux,” he recalled, and he, Fukunaga and production designer Mark Tildesley kicked around where Bond might go next. Alongside new locations (the Faroe Islands) there are places more familiar, like Jamaica, long considered the spiritual home of Bond by virtue of his creator Ian Fleming having a villa there.

Matera, a UNESCO World Heritage Site in southern Italy, pictured in a scene in “No Time To Die.” Credit: MGM/Universal

Melery decorated Bond’s Jamaican home. It’s a rare opportunity; while the books describe the spy’s Chelsea apartment, the films have only visited his house on three occasions. “Bond is this character who travels, who doesn’t carry his past with him, doesn’t really settle easily,” she said. That’s all changed. “I hope that even if it’s really short moments, we understand a bit of this person when we see where he lives.”

The setting is indicative of a pivot to sharing more of the characters’ private lives. In “No Time To Die” we visit Q’s apartment (complete with a work from home set up many would kill for), and Melery and Tildesley injected more personality into M’s office. A Paul Nash painting “Battle of Germany“, an abstract work from 1944 of a city under attack, was selected to hang on his wall and features prominently. Nash aficionados will discover the painting speaks to multiple themes within the film. “Nothing is gratuitous,” Melery said of her work. “It’s a direct connection with himself,” she added, explaining the movie shows “a certain kind of failure” and “emotional weakness” from the MI6 chief “which we are not used to.”
Elsewhere, there are callbacks to the work of the franchise’s first production designer, Ken Adam. For the lair belonging to villain Safin (Rami Malek), Tildesley and Fukunaga wanted to return to the Brutalist movement that influenced Adam (look hard enough and you can find a direct reference to “Dr. No”). Full of bare concrete and sharp angels, it’s the kind of set few blockbusters pull off these days.

But Bond operates on a different scale to most. Hayes worked with all three branches of the British military, and a C-17 RAF warplane and a Royal Navy Type 45 destroyer both have supporting roles. A car chase through Matera in southern Italy meant commandeering the main road running up and down the hilltop town and UNESCO World Heritage Site. For an early scene involving figures in military garb abseiling down a London skyscraper, a team hung cameras from buildings in Canary Wharf and stitched the shot together with actors on a studio set. The name Bond “definitely gets you through the door,” Hayes said. “They know you’re professional, they know that they’re in good hands.”

Characters abseiling down a skyscraper in a scene in “No Time To Die.” Credit: MGM/Universal

It’s the scale of the film — as well as the occasion — that its creators hope will entice audiences back into cinemas after three release dates (April 2020, November 2020 and April 2021) were nixed due to the pandemic.

“We literally shot on IMAX,” said Fukunaga. “Just being around an audience and feeling the laughs and the tension and that sort of collective, contagious energy of being in an audience … I think the film plays very well to all those things.”

Even the actor behind Q believes it’s time for audiences to put the gadgets away. “This one has an incredible scale and spectacle and visual imagination,” Ben Whishaw said. “It would be really so disappointing if people were watching it at home or, even worse, on their phones on YouTube.”

With UK cinemas hiring extra staff to cover bumper ticket sales, early indications are good. Where the franchise goes next is less certain. Amazon, which recently bought MGM Studios (co-owner of the rights to Bond), says it is committed to the theatrical release of future titles. Meanwhile, Broccoli says the new face of Bond won’t be considered until 2022.

Madeleine Swann (Lea Seydoux) and James Bond in “No Time To Die.” Credit: DANJAQ, LLC AND MGM. ALL RIGHTS RESERVED

For now, the limelight is firmly on Craig, an actor who has overhauled the spy and seems to finally be at peace with the franchise just as he makes for the exit.

“He (Craig) brought a modernity to the character that we haven’t seen in previous iterations,” said Fukunaga. “He showed us a very complicated man, with damage and with a heart — a beating heart — as well as being an effective killer.” How will he be remembered? “I think very fondly.”

“With his portrayal we’ve really been able to explore the emotional life of Bond. We’ve seen him cry in films. We’ve seen him bleed,” said Broccoli. “We’ve seen him be very vulnerable. And I think that’s one of the trademarks of his extraordinary reign.”

And now it’s all over. The film is soon to be with audiences and Broccoli, Wilson and co. will be back staring into their crystal ball. But for Craig’s Bond at least, the job is done. 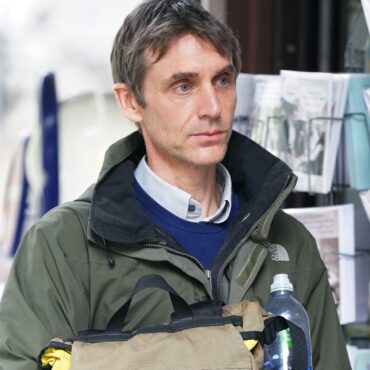