Why Daniel Craig’s body makes him a subversive 007

The year was 2006. Up on the cinema screen, Daniel Craig rose from the azure sea somewhere in the Bahamas, water clinging to abs and trunks alike. In the theater this writer was in, a woman, laboring over each word, let out what many others were thinking: “Oh. My. God.” “Casino Royale” was 29 minutes into its run time, but in that moment a new James Bond was born.

For that moment audiences have Craig to thank, but also someone else: his conditioning coach, Simon Waterson. In the 15 years since the actor was cast as 007, he has turned to Waterson time and again. Now, with Craig’s fifth and final outing as Bond in “No Time to Die,” they’re warming down together for the last time.

Waterson, a former Navy man, was involved in the franchise before Craig, as personal trainer to Pierce Brosnan in “The World Is Not Enough.” When Craig came on board, he arrived with a cigarette and a bacon sandwich. But he also arrived with a vision, Waterson said. “From the very beginning he never wanted a trainer — he wanted a training partner,” he remembers. “Whatever he did, I did.”

That routine has stayed the same across all five films, and it shows. Waterson and Craig’s bodies are similarly proportioned. With the same crew cut, Waterson even bears a passing resemblance to the actor.

For “No Time to Die” he tailored workouts to match action sequences in the script, to help Craig perform his own stunts (when allowed). “It just makes his life easier,” said Waterson. Easier, not easy. “A shooting schedule is brutal. It’s not an easy task to ask a guy to perform as an athlete every day, six days a week,” he added. “It’s like training for the Olympics, but then doing your event every day for seven months.”

Beyond the muscles, the gym was integral to character development from film one, Waterson suggested. “As far as the evolution of the character’s mentality and physicality goes, he had a firm idea of what he wanted to do, which is great,” he said. “The way we work is not really around the complete aesthetic. It’s all about performance.”

Craig, an intelligent actor whose subtleties haven’t always been as appreciated as they should, has played a subversive Bond in many ways. Other 007s sought to live up to the image of the deadly Adonis; so far Craig’s has spent four films toying with it, while also appearing the most likely to snap you like a twig.

Crab Key, “Dr. No” (1962) — Dr. No’s compound was situated on the fictional island of Crab Key, off the coast of Jamaica. Its underground living quarters had ostentatious touches — a glass wall with underwater views, Goya’s portrait of the Duke of Wellington — and all the home comforts to wine and dine Bond. But the island also contained a secret lab. It was from there that Dr. No, the SPECTRE agent with the metal hands, planned to use an atomic-powered radio beam to interfere with NASA rocket launches.

In real life Ocho Rios, Jamaica was used for the shoot, with novelist Ian Fleming’s villa Goldeneye not far away. For the interiors, shot at Pinewood Studios outside London, production designer Ken Adam used back projection to imitate the sea and dressed the living quarters with some of his own antique furniture, according to Meg Simmonds, author of “Bond by Design: The Art of the James Bond Films.” Credit:

The Craig era has seen the franchise “adopting a more body-focused model of masculinity,” first glimpsed in the last Brosnan film “Die Another Day,” argued Lisa Funnell, a Bond scholar and associate professor at the University of Oklahoma. “(Craig’s Bond’s) identity is not centered on bedding women, it’s about bodily resistance.”

The series’ pivot to serialized storytelling has reconfigured Bond’s relationship with his body. We all know he can take a punch, but now we’re shown the bruises, and the violence inflicted has been more visceral, more personal, than previous incarnations. He took a bullet in “Skyfall,” a drill to the skull in “Spectre,” and was poisoned then tortured in his nether regions in “Casino Royale.” These films have made a point in saying the body isn’t designed to endure so much for so long. In “Skyfall,” Bond failed his physical and psychological evaluation. He’s been told repeatedly to retire. “There’s this notion across the Daniel Craig era of him coming back from the dead,” Funnell said. “His body becomes this living archive of trauma.”

There’s also been a degree of life imitating art. Craig reportedly tore cartilage in his shoulder filming “Quantum of Solace,” ruptured both calf muscles in “Skyfall,” snapped a knee ligament in “Spectre” and underwent minor ankle surgery during the shoot for “No Time To Die.” Rehabilitation has become part of the gig.

Vulnerability is two-fold, and along with physical trauma, Craig has portrayed emotional trauma too. We’ve seen him fall for Vesper Lynd in “Casino Royale” then watch her die, appear lovesick in “Quantum of Solace,” lose his mentor in M in “Skyfall” and have his childhood dredged up in “Spectre.” For a character once unburdened by the past, Bond is now haunted by it.

“I give a lot of credit to Daniel Craig for embodying, not just in a physical sense but an emotional sense, the journey that Bond goes on,” said Funnell. “He’s somebody who has expressed that he wants to be taken as a serious actor, he wants it to come from the inside, but this is a character where there’s a lot of external stuff.”

Craig has wrestled with this. “The best acting is when you’re not concerned about the surface. And Bond is the opposite of that,” he said in 2015. “You have to be bothered about how you’re looking. It’s a struggle. I know that how Bond wears a suit and walks into a room is important. But as an actor I don’t want to give a f—k about what I look like!”

It is perhaps a double bind. Craig and Waterston have worked together to create a physique that fulfils the character’s macho prerequisites, allowing the actor space to explore what else Bond could be: vengeful, jaded, loyal, loving, even mournful. Nevertheless, the surface still gets the attention.

How the physical and emotional journeys end in “No Time To Die” remains to be seen. Speculation that Bond could be killed off has been persistent, and wouldn’t be entirely out of step with Craig’s iconoclastic tenure. Maybe the body really can take no more.

In any case, the actor survived the production, so Waterson’s mission can already be considered a success. And if the spy can still raise a flutter out of the audience … well, that’s just the cherry on the cake. 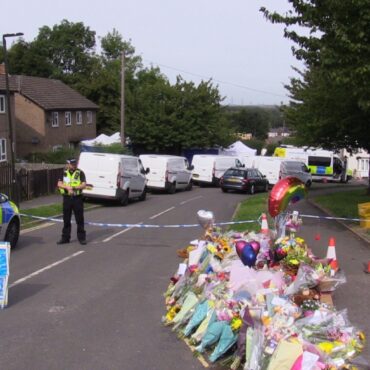 Man charged with murder of Killamarsh mother and three children

A 31-year-old man has been charged with four counts of murder after a mother and three children were found dead in a house. The bodies of John Paul Bennett, 13, Lacey Bennett, 11, their mother Terri Harris, 35, and Lacey’s friend Connie Gent, 11, were discovered at a property in Chandos Crescent in Killamarsh, near Sheffield, on Sunday morning. Derbyshire Police said Damien Bendall has been charged with their murder […]