With No End in Sight, Ottawa Protests Extend Beyond Canada’s Borders 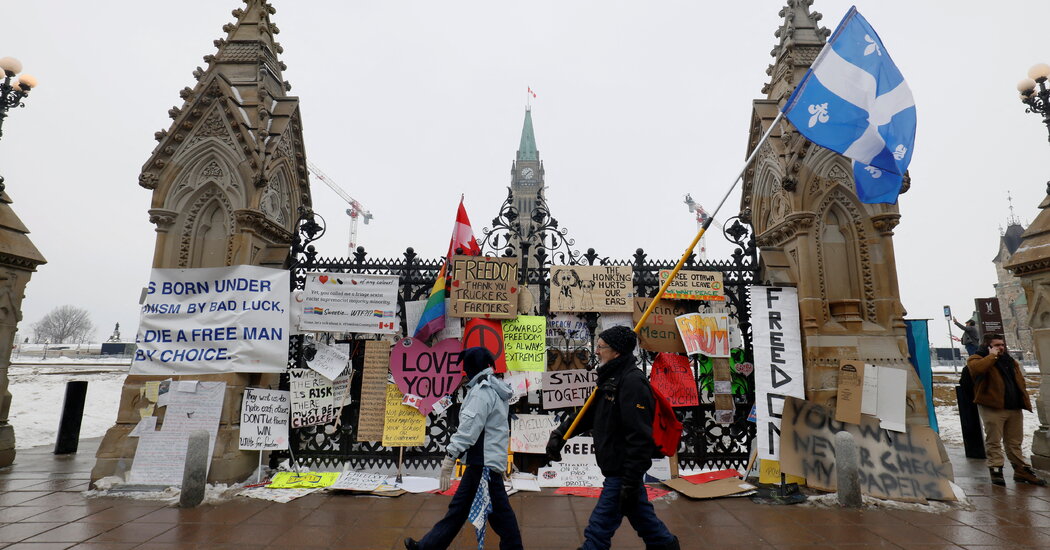 As Ottawa residents woke up Tuesday to their 12th day of protesters occupying the core of Canada’s capital, the demonstrations continued to reverberate beyond Canada, with a new road blockade temporarily cutting off the country’s busiest link to the United States and copycat convoys spreading to New Zealand and Australia.

The optics of Canada’s usually placid and orderly national capital overtaken by truckers and their supporters protesting coronavirus restrictions has shaken the country, and presented a difficult challenge to law enforcement and the government of Prime Minister Justin Trudeau, which have failed to tame the protesters.

The demonstrations have also captured the imagination of far right and anti-vaccine groups around the world, raising millions of dollars in online campaigns and inspiring protests in at least two countries — New Zealand and Australia — with talks of a third in the works in the United States.

What began as loosely organized groups of truck drivers and protesters opposed to the mandatory vaccination of truckers crossing the border has tapped into wider national fatigue with pandemic restrictions, while emboldening Mr. Trudeau’s critics.

Most of the protesters and the organizers are clearly on the fringe, with some even wearing Nazi symbols and desecrating public monuments. But others who have arrived in Ottawa describe themselves as ordinary Canadians driven to take to the streets by desperation after nearly two years of pandemic restrictions.

Fears of economic fallout from the crisis were magnified on Monday after a new protest blocked the road in Windsor, Ontario, from a bridge linking the city to Detroit. The Ambassador Bridge is critical to the automobile industry, an important sector of the Canadian economy, which relies on a constant shuttling of parts and components and finished cars across the border to keep factories humming in Ontario and the Midwestern United States.

Most of the trucks in the Windsor protest were covered with flags and posters denouncing vaccine mandates and Mr. Trudeau. Heavy trucks and private vehicles blocked traffic from entering and exiting the bridge in Canada, closing it in both directions. An alternative bridge entrance allowed traffic to begin slowly moving again to the United States on Tuesday morning, according to the Windsor police.

While the demonstration in Ottawa that started in January is far from over, an injunction issued Monday night barring horn honking and authorizing the police to arrest or remove those violating the order gave residents a reprieve overnight and meant that Ottawa’s streets were quieter on Tuesday, despite the continued presence of more than 400 truckers still parked downtown.

Yet every day that the occupation continues, it seems to raise greater support among prominent far-right and anti-vaccine figures. The protest has drawn the attention of activists and influencers from numerous countries, including the United States, Australia and Germany, spreading hashtags, images and arguments across social media.

Thousands of people in cars, trucks, caravans and other vehicles crossed New Zealand and Australia this week to protest pandemic restrictions. The demonstrations — including a “Convoy to Canberra,” the Australian capital — are an echo of the so-called “Freedom Convoy” that has swarmed Ottawa.

Australia and New Zealand, which have some of the world’s highest vaccination rates, prohibit unvaccinated people from going to cafes, bars and restaurants, and from visiting museums or other attractions. Those who are not vaccinated make up a small but vocal minority, with protests taking place in both countries throughout much of the year.

A convoy in New Zealand arrived in Wellington, the nation’s capital, on Tuesday with thousands of vehicles, many flying New Zealand flags or bearing signs against mandates and in favor of “freedom.”

Prime Minister Jacinda Ardern of New Zealand said she would not meet with the protesters. “We have a full day in Parliament today,” she told Radio New Zealand on Tuesday, adding, “That’s what we’ll be focused on today.”

There were few examples of public vandalism, though a convoy of demonstrators held up traffic at Canberra Airport to delay travelers. Protests also disrupted traffic, prompting buses to be rerouted.

In Australia, the convoy was made up not only of those opposed to vaccination mandates, but also of people who claim to be “sovereign citizens” and not subject to any laws, and members of some religious groups. Some accused lawmakers of being “pedophiles,” or said they would soon be arrested for treason. Others held flags in support of the conspiracy theory movement QAnon.

Some demonstrators in both countries claimed to be demanding greater rights for Indigenous groups. But in Australia, the Aboriginal Tent Embassy in Canberra disavowed the convoy. In New Zealand, many Maori tribes have encouraged their members to get vaccinated or organized vaccination drives for them.

In Canada, opinion polls have consistently shown strong support for public health measures to limit the spread of the coronavirus, which have mostly been imposed by provincial governments, many of them led by Conservatives.

But on Tuesday, Scott Moe, Saskatchewan’s conservative premier who has previously voiced support for the protesters, announced that the province would end proof of vaccination and negative test policies on Feb. 14. Indoor mask requirements will continue until the end of the month.

In Ottawa, Mr. Trudeau, who is already under fire by opposition Conservatives over his handling of the crisis, faced new dissent from within his own party ranks on Tuesday. Joël Lightbound, a Liberal member of Parliament from Quebec, spoke out against Mr. Trudeau’s stewardship of the pandemic, saying that people worried about the government’s policies had “legitimate concerns.”

Mr. Trudeau on Tuesday continued to stand by his commitment to vaccine mandates as the best means to fight the pandemic. And he has had his own message Monday night for the protesters in the national capital, whom he accused of undermining Canadian democracy: “It has to stop.”

As the anti-vaccine demonstrations in Ottawa persist for a second week, Mr. Trudeau has steadfastly refused to negotiate with the protesters. Speaking to the House of Commons in Ottawa on Monday night, the prime minister said the protests were harassing Ottawa residents “in their own neighborhoods.”

They are “trying to blockade our economy, our democracy and our fellow citizens’ daily lives,” he said.

The police have struggled to come up with measures to dismantle or even contain the occupation. Officers were swarmed by protesters in Ottawa on Monday, though none were badly injured, said Steve Bell, Ottawa’s deputy police chief, in a news conference on Tuesday. The episode took place as the police were seizing canisters of fuel being delivered to protester encampments.

“There’s many layers of complexity to dismantling this occupation,” said Mr. Bell. “One is the sheer size of it. It covers many blocks in our city’s downtown core.”

The other is the size of the trucks — giant cabs, in some cases with their trailers still attached, parked on city streets. About a quarter of the trucks have children living in them “who could be at risk during police operation,” said Mr. Bell.

Mr. Bell said police officials are exploring several legal avenues, and, in addition to more officers, have asked for additional lawyers from various agencies, as well as experts in insurance, licensing and registration of large trucks.

The occupation has forced many business owners in Ottawa to close their doors, losing tens of millions of dollars in the process. Those who have stayed open have seen little business, as few people can or are willing to access the city’s downtown area.

Last month, in anticipation of indoor dining restarting in Ontario, Joe Thottungal bought an extra large order of meat and produce for his downtown Ottawa restaurant, Thali. But the day after most of his highly perishable inventory arrived, the trucker convoy rolled into the capital.

While the street in front of Mr. Thottungal’s restaurant is truck-free, which allows him to remain open, most patrons have stayed away, out of fear of harassment from protesters or because roadblocks and road closures have made Thali inaccessible.

On Monday night, seven Thali employees cooked and served a total of five customers. For Valentine’s Day, he currently has six reservations, down from an expected 90 bookings.

“This is a G7 capital and it’s under siege — come on,” he said during lunch on Tuesday, when only three customers were eating. “Can anybody in the government can tell us when this downtown will be normal? Nobody’s saying, so how do you plan?” 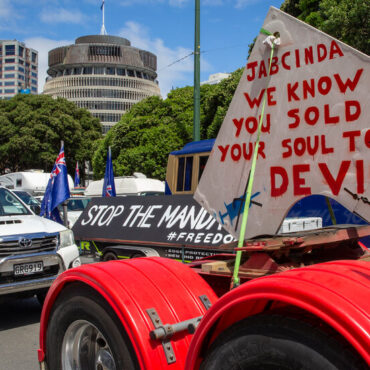 new video loaded: Protest Convoy Arrives in New Zealand CapitaltranscriptBackbars0:00/0:33-0:33transcriptProtest Convoy Arrives in New Zealand CapitalInspired by truckers demonstrating in Canada, a convoy of protesters calling for an end to pandemic restrictions and vaccine mandates arrived in Wellington. Prime Minister Jacinda Ardern said their views didn’t represent the majority.I think it would be wrong to, in any way, characterize what we’ve seen outside is a representation of the majority. The […]