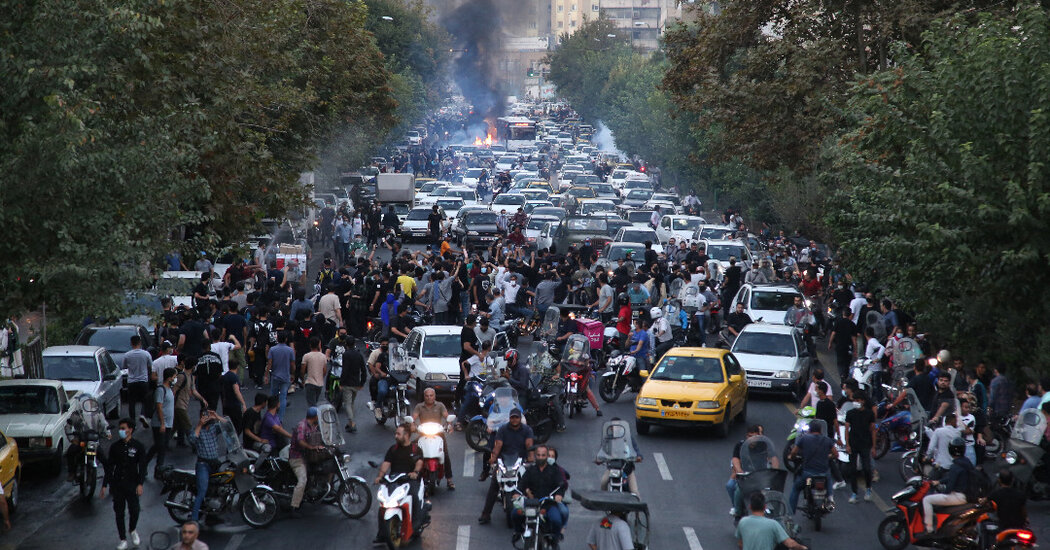 Iran’s largest antigovernment protests since 2009 gathered strength on Saturday, spreading to as many as 80 cities.

Protesters have reportedly taken the small, mostly Kurdish city of Oshnavieh. Many fear a crackdown: “We are expecting blood to be spilled,” said an Iranian Kurd based in Germany who edits a news site. “It’s an extremely tense situation.”

In response, the authorities have escalated their crackdown, including opening fire on crowds. On Friday, state media said at least 35 had been killed, but rights groups said the number is likely much higher. Activists and journalists have also been arrested, according to rights groups and news reports.

Background: The protests were ignited by the death of Mahsa Amini, a 22-year-old woman who was arrested by the morality police on accusations of violating the hijab mandate. Women have led the demonstrations, some ripping off their head scarves, waving them and burning them as men have cheered them on.

Context: Analysts say that deep resentments have been building for months in response to a crackdown ordered by Ebrahim Raisi, the hard-line president, that has targeted women. Years of complaints over corruption, economic and Covid mismanagement, and widespread political repression play a role.

Shinzo Abe, Japan’s former prime minister who was assassinated in July, is scheduled to be buried tomorrow. The state funeral has led to widespread frustration and outcry.

Thousands of protesters have taken to the streets or signed petitions, complaining that the ceremony is a waste of public money. They also say that the funeral was imposed upon the country by Fumio Kishida, the unpopular current prime minister, and his cabinet. Some polls show that more than 60 percent of the public opposes the funeral.

Abe’s assassination has also set off uncomfortable revelations about ties between politicians in Abe’s Liberal Democratic Party, which is still in power, and the Unification Church, a fringe religious group. The South Korea-based group is accused of preying on vulnerable people in Japan, like the mother of the man charged with murdering Abe.

The State of the War

Legacy: The backlash has also become a referendum on Abe’s tenure. While Abe was largely lionized on the global stage, he was much more divisive in Japan, where he was involved in controversial decisions and scandals. “Now people think, ‘Why didn’t more people get mad at the time?’” one sociologist said.

Context: Tetsuya Yamagami, the man charged with Abe’s murder, had written of his anger at the Unification Church. A journalist said that Yamagami has become a kind of romantic antihero for some people who have felt buffeted by economic and social forces.

In two regions, Kherson and Zaporizka, all men ages 18 to 35 have been forbidden to leave and ordered to report for military duty, Ukrainian officials and witnesses said. The roundups follow President Vladimir Putin’s declaration of a “partial mobilization” last week that is also sweeping up hundreds of thousands of Russians.

Moscow is also forcing residents of occupied areas to vote in staged referendums, which began on Friday, on joining Russia. Despite the votes, Ukraine’s military kept fighting to reclaim territory. Volodymyr Zelensky, Ukraine’s president, urged Ukrainians to avoid mobilization efforts “by any means” and called on Russians to resist Putin’s conscription.

“Sabotage any activity of the enemy, hinder any Russian operations, provide us with any important information about the occupiers — their bases, headquarters, warehouses with ammunition,” he said on Friday. “And at the first opportunity, switch to our positions. Do everything to save your life and help liberate Ukraine.”

Ukraine is making gains in the south, but the fighting is resulting in many casualties. And Ukraine is pushing ahead to retake areas in the northeast and the south, dismissing Moscow’s threats to annex territory.

Draft: Russia’s call-up of military reservists appears to be drawing more heavily from minority groups and rural areas. Criticism is growing, and at least 745 people have been detained across Russia after protests.

Death: Serhiy Sova’s body was exhumed from a grave in Izium. The image of a bracelet on his wrist in Ukraine’s colors, given to him by his children, has transfixed the nation.

In 2002, the Joola ferry left Ziguinchor, Senegal, with about 1,900 aboard. It tilted, then capsized. More people died on the Joola than on the Titanic, and only 64 people survived.

For the anniversary of the disaster, The Times’s West Africa correspondent, Elian Peltier, vividly recreated the little known incident. Alongside Mady Camara of the Dakar bureau, Peltier met with survivors who still bear scars.

“Their trauma remains so pronounced — the insomnia and speech issues, alcoholism, depression, survivor’s guilt, just to name a few symptoms — but it mostly remains unaddressed,” he said.

A prosecutor concluded that only the captain, who died, was culpable, despite a separate report that revealed considerable dysfunction, including warnings about the military-run ship’s condition.

The relatives of most victims have given up trying to find justice, instead pouring their efforts into raising the wreck to honor their loved ones. More than 550 have been buried, but most remain 59 feet deep in the Atlantic.

“The swell has been hitting these souls for the past 20 years,” Elie Jean Bernard Diatta told our reporters. Her brother Michel died while taking 26 teenagers to a soccer tournament. “They speak to us in dreams, and they ask for one thing only: to rest in peace underground,” she said.

That’s it for today’s briefing. See you next time. — Amelia

P.S. Riis Beach has long been a haven for queer New Yorkers. That could soon change with development. “Queer people will always find a way to keep a space that is sacred to them,” said Yael Malka, a photographer who visited the beach more than two dozen times this summer.

The latest episode of “The Daily” is on the future of American evangelicalism.

Lynsey Chutel, a Briefings writer based in Johannesburg, wrote today’s Arts and Ideas. You can reach Amelia and the team at briefing@nytimes.com. 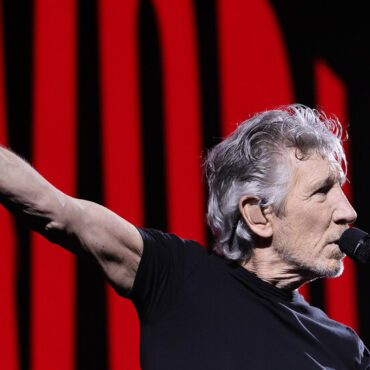 One of Poland’s biggest music venues has canceled a concert by Roger Waters, the co-founder of the rock band Pink Floyd, after he was roundly criticized there for his view that Ukraine should pursue peace with Russia.Live Nation Polska and Tauron Arena Krakow gave no reason for the decision to cancel the appearance by Mr. Waters, set for next year, in a brief statement on the venue’s website. But the […]